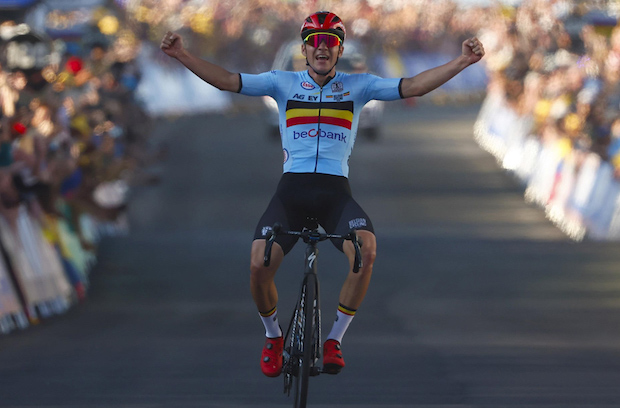 Remco Evenepoel continued his magnificent season with a solo breakaway to win the world road race title on Sunday, adding the rainbow jersey to his triumphs in the Vuelta a Espana and the Liege–Bastogne–Liege.

Two weeks after giving Belgium its first Grand Tour champion in 44 years at the Vuelta, the 22-year-old rider gave his country its first world road race champion in a decade.

“It’s something I’ve been dreaming of. After a monument, a big classic a grand tour, and a world championship, I think I won everything I could have this year. I think I will never have another season like this,” he said. “It will be a big party tonight, I’m not going to see my bed I guess.”

“I think how we raced today really like a team. Like I said before, we wanted to become a world champion as a team, it didn’t matter how,” Evenepoel said. “It was Wout’s chance or my chance, it was my chance to go from early and Wout was to follow along and sprint. I guess the early attack mde it today. But I just think we deserve it. We really deserve it.”

What a ride 🤯🌈#Wollongong2022 pic.twitter.com/Mhxm1zCJuQ