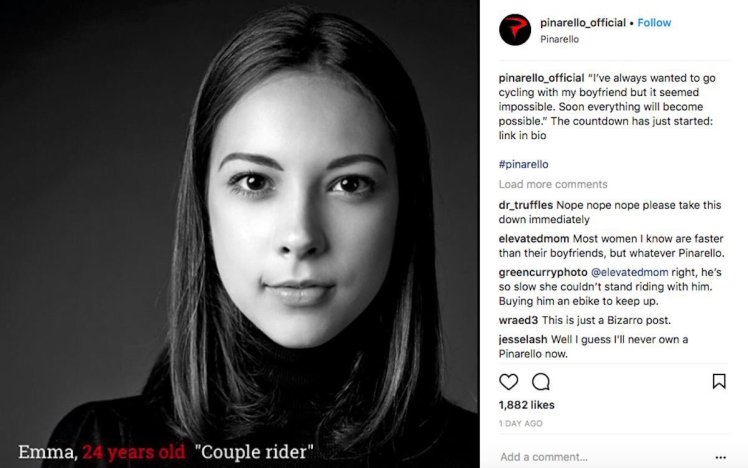 Pinarello recently launched its new Nytro e-bike to much fanfare but is facing accusations of sexism and ageism in its adverts on social media.

Both a press release and an Instagram teaser ad implied that the bike was a dream ride for women—but only because they need its help to keep up with the men in their lives.

Pinarello said its new carbon road e-bike was aimed at weekend riders and female riders who want to “follow easily the men’s pace.”

“Nytro aims at a wide target, from the one that has no time to train but would never miss a weekend ride with friends, to women who would like to follow easily the men’s pace, or even the ones who desire to experience cycling as a new way of life, climbing easily and going downhill safely, enjoying every single minute on the bike.”

The brand has since removed its first Instagram post. The images and accompanying stories were met with wide ranging criticism from men and women.

The Italian company issued an apology.

“Our recent advertisement failed to reflect the values of diversity and equality that are core to Pinarello,” it said via Twitter. “The Nytro is designed to make cycling accessible to more people and our advertisement clearly failed to convey that message. We sincerely apologize and have pulled the ad.”