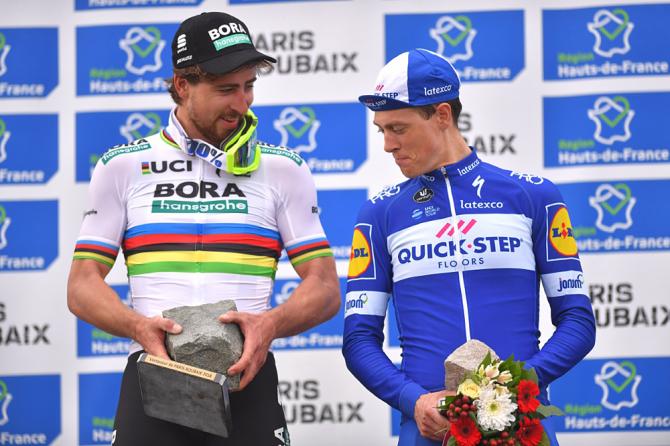 Niki Terpstra took his third podium in Paris-Roubaix, after riding away from a chasing group inside the closing kilometers of the race and arriving on the famed André-Pétrieux Velodrome less than a minute behind Peter Sagan (Bora-hansgrohe) and Silvan Dillier (AG2R).

“I’m not as happy with third as I was with winning last week, but if you look at the race, the world champion was the best today,”

“We attacked early with different riders but unfortunately when Peter made his move we were not there to react,” said Terpstra. “If you make a move like that, it’s not only with the brains but with the legs. He must have the legs to do this.”

Terpstra was the one doing most of the work in the chasing group, attacking on the five-star sector of Mons-en-Pévèle and forcing an important selection. Only a handful of riders could follow the Ronde van Vlaanderen champion, who put in two more searing accelerations, on Carrefour de l’Arbre and then with 1500 meters left, dispatching all his companions and entering alone on the Roubaix velodrome.

“The cooperation was not so bad, we were just not strong enough,” Terpstra said. “It’s logical after this Spring campaign that others look to Quick-Step, but they also knew if they didn’t chase Sagan they weren’t going to win the race. So you don’t hear me complaining about a lack of cooperation.”

“The race is 260 kilometres long, and you can’t be on the front with your team for all 260 kilometres. It was good to be in front and stay out of trouble earlier in the race. At that moment, we didn’t have someone on the front row, but it’s not only Quick-Step who make the race.

“There were had some attacks before it, with Zdenek and Philippe. Greg [Van Avermaet] did an attack as well. But in the end, it was Peter and that was the right one. It was pretty early, but sometimes a moment is the right moment.”