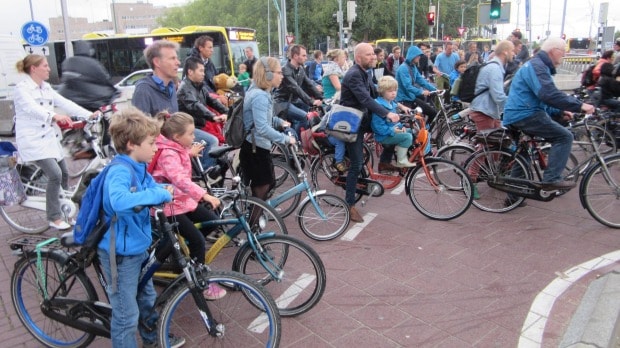 (AFP) – Dutch employees using pedal power to get to work may soon be reimbursed for their efforts, as the Netherlands look at ways to fight ever-growing congestion on its busy roads and highways.

“Let’s get out of our cars and onto our bikes,” Dutch deputy infrastructure minister Stientje van Veldhoven said this week, as she announced new measures to push even more citizens from four wheels to two.

“I want to stimulate cycling with the aim of getting 200,000 extra people out of their cars to cycle three billion kilometres more on their bicycles,” she said in a press release.

One innovative idea is to compensate employees for cycling to work, with Van Veldhoven proposing a reimbursement of 19 cents ($0.22) per kilometre cycled from home and back.

Van Veldhoven is to discuss the proposal and other ways of promoting bicycle use through fiscal rewards such as subsidies to buy bicycles “with major national employers and small and medium enterprises,” her ministry said in a statement.

Netherlands already counts more than 22 million cycles in a country of 17 million, according to the umbrella BOVAG federation of Dutch transport dealerships.

The country also has tens of thousands of dedicated bicycle paths criss-crossing its flat polders and canals.

“Bicycles play an important role when it comes to reachability, quality of life and health,” Van Veldhoven said. “It reduces traffic jams and gives people forced to use cars more space,” she said.

“With the development of the electric bicycle, this distance can easily be covered,” the ministry added, saying that some 100 million euros have been budgeted to increase bicycle roads and bicycle parking space.