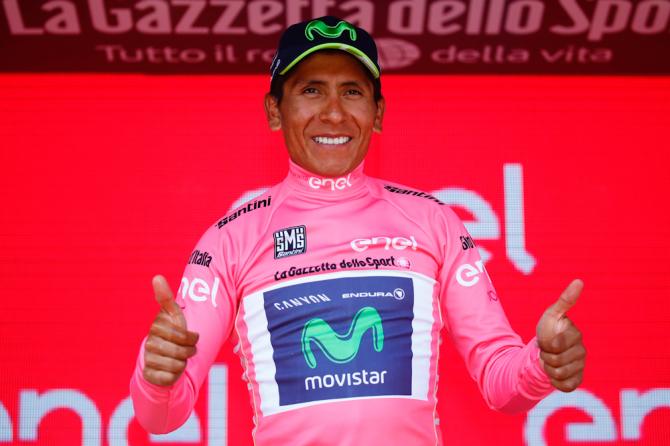 Nairo Quintana reclaimed the pink jersey from Tom Dumoulin with two stages to go in the 2017 Giro d’Italia on Friday, setting up what could be a dramatic finale in Milan on Sunday.

“It was a very, very hard day, where all the efforts from Thursday and the stages before ended up paying off. We’ve spent the whole Giro working our hearts out to take the overall win, and we had to keep trying again today”, said Quintana.

“We took a long shot at that descent with most of the team, and also pushed hard into the final climb, initially with a strong relay from Winner Anacona and then with Rojas and José Herrada, who gave all they had at their own moments. The impressive job by the whole team was evident again this time, and I can’t thank them enough and recoginise all that they do for me, not only riders but the whole staff, sports directors… We planned a good strategy, we delivered and we were able to make the race leader crack and remain close to the rest of GC contenders.

“You’ve always got doubts about what wheel should you follow on that final climb. I knew I had to keep an eye especially on Nibali, but sometimes, it’s up to other rivals to leave you behind and create gaps which are really difficult to close. However, you also need to measure your efforts well. Sometimes, a pedal stroke too much means precious seconds that you lose at the end.

“We just hope to keep this strong line tomorrow and defend ourselves well. The TT on Sunday – well, that’s a final battle, one-to-one, where we must leave everything that we’ve got. There’s a lot of pressure on our shoulders, our rivals are also really strong, but we’ve got the Maglia Rosa at the moment and we will try to defend it with honour. We’ve got a veteran group, we’re consistent, experienced, and I trust my whole group of team-mates to defend ourselves well tomorrow.”