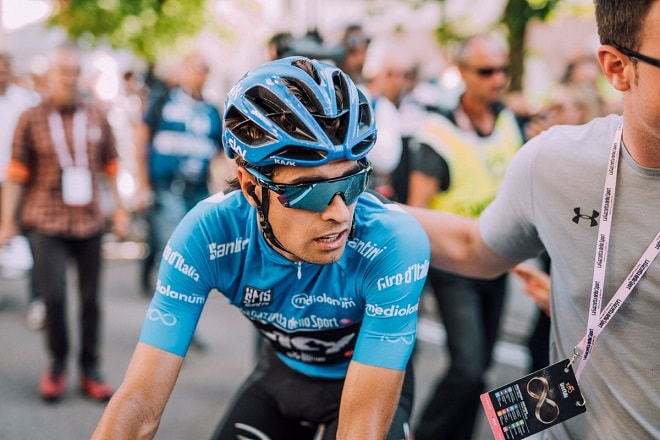 The Basque star bounced back from the disappointment of an early race crash, as well as two second place finishes, to vanquish his rivals on the Piancavallo climb.

Solidifying his mountain’s jersey lead in the process, Landa benefited from the effort of team-mate Sebastian Henao, who joined him in a group of 18 riders towards the end of an enthralling stage. The Colombian shut down dangerous attacks on the final first-category climb, giving Landa the springboard he needed to attack, and eventually win the stage by one minute and 49 seconds.

“It’s been difficult moments for the last month at the Giro. We started well, then we had the crash. We had to regroup. I feel very happy and emotional, especially as my family were here today. I had a team-mate in the breakaway today and I think that helped for my win today. “It’s not what we expected at the beginning but I’m very happy and very proud.”

The stage also saw a thrilling battle among the GC contenders, with huge plot twists across the 191km test. The fight for the maglia rosa saw the lead change hands heading into the final weekend.

Nairo Quintana (Movistar) dug deep on the final climb to unseat Tom Dumoulin (Team Sunweb)  at the head of the race by 38 seconds. Dumoulin was placed under intense pressure, and after battling back across a split in the peloton early in the day, the Dutchman began to slip back on the final climb, ultimately losing the race lead.

“I had bad legs from the start today”, said Dumoulin. “I made a rookie mistake earlier on in the stage and was sat at the back of the bunch. Other GC teams started to pull and the bunch split and caught me out. I needed to put in a lot of energy to get back across to the group which wasn’t ideal when my legs already weren’t great. In the final I tried to limit my losses which I think I did pretty well. The team were so strong and saved me a couple of times, I really have to thank them because without them it would have been a much worse day. I hope the legs are better tomorrow.”