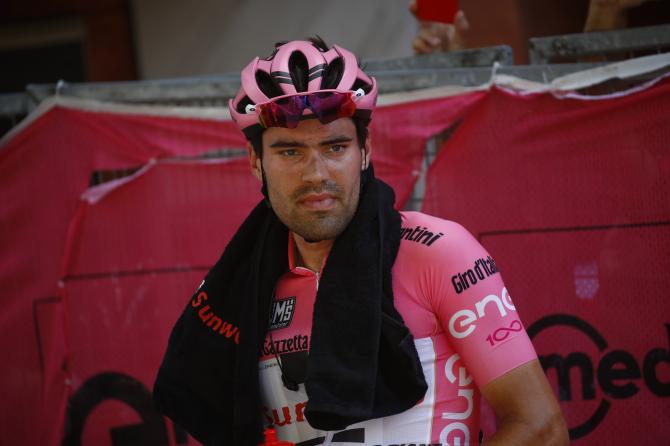 A multitude of attacks opened the 19th stage of the Giro d’Italia, with a group of 14 going clear almost as soon as the flag dropped.

Whilst the group were busy increasing their lead to the four minute mark, attacks came from the general classification group which saw the maglia rosa distanced from his closest rivals.

As the gap peaked at 2 minutes, a relentless chase from the group saw Tom Dumoulin rejoin the other favourites and in amongst the chaos and injection of pace from behind, the early breakaway was brought back with 93 kilometres to go.

“I had bad legs from the start today”, said Dumoulin. “I made a rookie mistake earlier on in the stage and was sat at the back of the bunch. Other GC teams started to pull and the bunch split and caught me out. I needed to put in a lot of energy to get back across to the group which wasn’t ideal when my legs already weren’t great”

The fireworks were lit again on the Piancavallo as Tom Dumoulin lost contact with the first GC group. Simon Geschke was still up there with the pink jersey, pacing him up the climb. With 8 kilometres to go Geschke pulled off after a job well done and Dumoulin continued to chase. In a race to limit losses, the race leader crossed the line 1 minute and 9 seconds down on Nairo Quintana. He now sits in second place, with 38 seconds separating him from pink.

“In the final I tried to limit my losses which I think I did pretty well. The team were so strong and saved me a couple of times, I really have to thank them because without them it would have been a much worse day. I hope the legs are better tomorrow.”