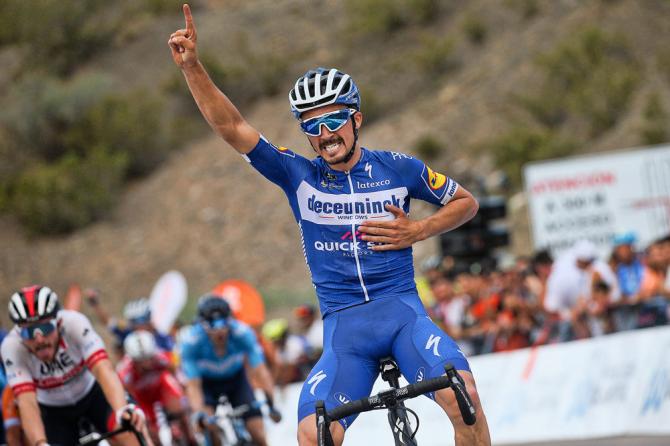 Cycling’s spring classics culminate with a new look Liege-Bastogne-Liege on Sunday where all eyes will be on Julian Alaphilippe.

Rivals and ex-pros alike have heaped praise on the 26-year-old who embarks on “La Doyenne” of the classics, first raced in 1892, surrounded by the all-powerful local team Deceuninck-Quick-Step.

Organisers have this year moved the finish line from atop a sharp ascent in the working class industrial zone into the centre of the prosperous Liege centre 15km away, where a wild reception awaits the finale of what is a huge event on the Belgian sports calendar.

Traditionally won on the old route by punchy climbers such as Alaphilippe, the new winning post is likely to see a select group contest a sprint, another discipline in which Alaphilippe excels.

“He’s total nightmare,” declared Jakob Fuglsang after coming second to him for the third time this season at the midweek Fleche Wallonne.

“I have massive respect for him and you can only admit he’s just the best one-day racer around,” said the Astana rider who also described Alaphilippe as a “good lad. He’s strong, very strong indeed.”

Alaphilippe had just won the Fleche for the second consecutive year with an astonishing late ‘kick’, a lethal last-minute acceleration which is becoming his trademark.

Winner of Milan-San Remo, Sunday’s race would mean a second Monument in a single season for Alaphilippe and, astonishingly, a first French win at Liege since Bernard Hinault clinched it in a relentless blizzard in 1980, one of just 21 finishers in a field of 174.

“He can win on every type of terrain,” said Jalabert, describing Alaphilippe as France’s most complete cyclist ahead of Romain Bardet. “He’ll be the man to beat at Liege”.

“He won’t win a Tour de France, but over a one-day race he has an amazing turn of speed that makes the difference in a small, lead group.”

Dan Martin, a former winner at Liege, said concentration over the seven-hour slog was key.

“With the new route, the attacks will come earlier,” he said of the course featuring 11 demanding climbs over its epic 256km. “I’d like to have Julian (Alaphilippe) on my team,” he said.

“But Alejandro (Valverde) is the favourite in a field with quite a few pretenders.”

“He’s got the power to get over the climbs, and of those riders who can manage to do that, he’s got one of the fastest finishes,” Indurain said.

Some 20.000 fans will gather at the Cote de la Redoute, the third climb from home, where many of these races have been won.

“With the new route in mind I think I’ve got a good chance,” Greg Van Avermaet said this week when adding the race to his schedule.

Team Sky will also be somewhere in the mix with both Wout Poels and Michal Kwiatkowski looking for one last Monument for the outgoing sponsor.