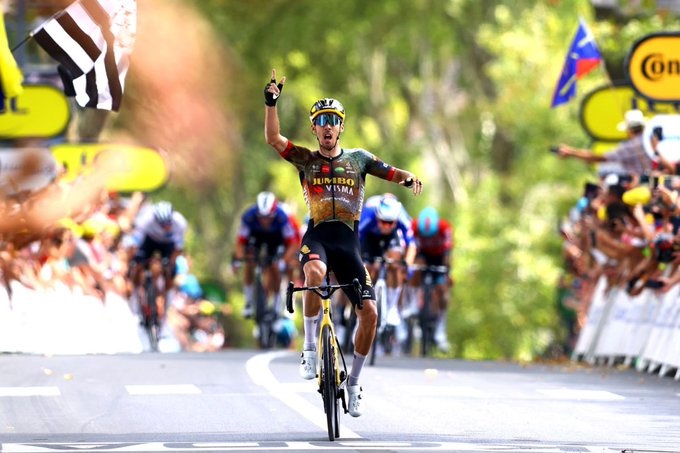 Christophe Laporte ended a lengthy home drought at the Tour de France, claiming the 19th stage with a perfectly timed effort on Friday to give the local fans something to celebrate for the first time in more than a year.

You can rewatch STAGE 19 HERE

Laporte, a domestique within the mighty Jumbo-Visma team of yellow jersey holder Jonas Vingegaard and points classification leader Wout van Aert, bridged a small gap with a leading trio in a nail-biting finale before moving clear 300 metres from the line.

Vingegaard was on the wrong side of a late split but the race jury gave the chasing bunch the same time as Philipsen and Dainese, although they crossed the line five seconds off the pace.

Vingegaard still holds a comfortable lead of 3:26 going into Saturday’s final time trial, a 40.7-km effort between Lacapelle-Marival and Rocamadour.

“A lot of French people had been waiting for this win and I’m happy I gave it to them,” said Laporte, who joined Jumbo-Visma this year after seven seasons at Cofidis. “Going to Jumbo is 100% why I won. In the last two months I spent six weeks in altitude, one week on the Dauphine and a week at home with my family only.

“Nothing is left to chance in this team. Preparation, nutrition, material. All the riders are world class. That’s thanks to that that I won today.”

After Quinn Simmons, the last survivor of the first breakaway group, was reined in by the peloton with 34 kilometres to go, Alexis Gougeard jumped away from the pack.

Pogacar, in yet another attempt to catch Vingegaard off guard, attacked in the descent from the Cote de Daunes but he was brought back by Van Aert.

Gougeard was joined by Fred Wright and Jasper Stuyven and the trio opened a 30-second gap but the sprinters’ teams had slashed it down to a handful of seconds with two kilometres to go.

Van Aert sacrificed his own chances to further reduce the deficit, allowing Laporte to make the jump to catch Wright and Stuyven.

He stayed on Stuyven’s wheel for a short while before launching his sprint at the right moment, holding his head in disbelief as he crossed the line.

“The priority was to keep Jonas safe today. But when we were five kilometres from the finish, Wout told me this one is for you, I’ll take care of Jonas,” said Laporte.”I got carte  blanche.”