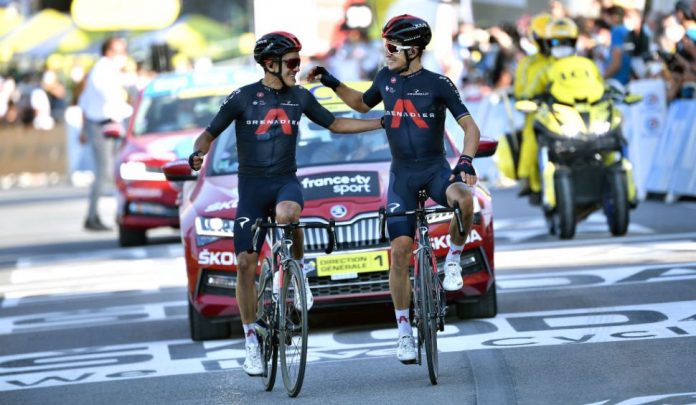 Michal Kwiatkowski claimed his maiden Tour de France victory when he won the 18th stage from a breakaway duo with team mate Richard Carapaz on Thursday.

Carapaz, who took the lead in the mountains classification, gave former world champion Kwiatkowski a pat on the back before they crossed the line together, which ensured the Polish rider would take first place.

The victory is a sweet reward for Kwiatkowski, whose role as a domestique has helped Chris Froome, Geraint Thomas and Egan Bernal win Tour de France titles since 2016.

Kwiatkowski said Carapaz offered to hand him the win as he was going to take the polka dot jersey for the mountains classification.

The result also gave Ineos-Grenadiers something to cheer about one day after defending champion Bernal abandoned the race because of back pains.

“I’m going to celebrate big time tonight,” said Kwiatkowski. “I just can’t compare it to any other victories because I’ve never experienced something like that before from so far,” added the 30-year-old, who won the world title in 2014 and the Monument classic Milan-Sanremo in 2017.

“We knew we were gonna win the stage and even with this pandemic there were still a lot of people screaming, shouting, (sports directors Gabriel) Rasch and (Xabier) Zandio on the radio, it was just super emotional, I had goose bumps all the way down from the last climb.”

Primoz Roglic retained the overall leader’s yellow jersey after the last mountain stage, a 175km effort from Meribel, as he controlled his closest rival and fellow Slovenian Tadej Pogacar.

Pogacar lags 57 seconds behind with Colombian Miguel Angel Lopez in third place, 1:26 off the pace.

Carapaz and Kwiatkowski were the strongest in the day’s breakaway, dropping their rivals one after another on the first climbs, also benefiting from the crash of Marc Hirschi in the descent from the Col des Saisies.

Hirschi went down at 60kph and while he could get back on his bike, he never made it back to the leading group which then included Carapaz, Kwiatkowski, Nicolas Edet and Pello Bilbao.

Edet and Bilbao lost contact in the ascent to the Col des Aravis, leaving the Ineos-Grenadiers duo on their own at the top of the Plateau des Glieres, a gruelling climb ending on gravel roads.