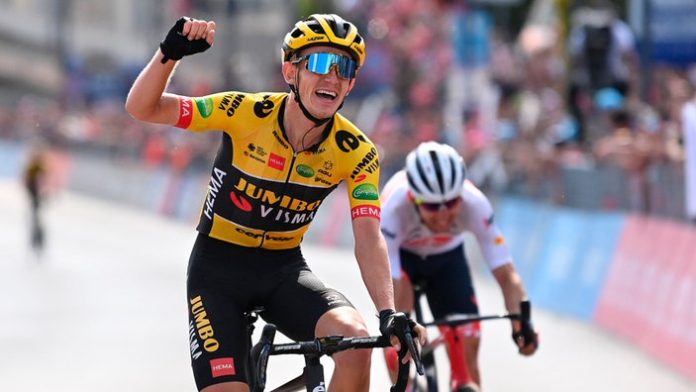 Koen Bouwman won stage 7 of the Giro d’Italia on Friday when four riders escaped from the main peloton along the 196km route from Diamante to Potenza.

Juan Pedro Lopez of Trek-Segafredo retains the overall leader’s pink jersey while Simon Yates and Richard Carapaz finished at the same time as the other title pretenders 2min 59sec adrift of the winner.

Bouwman rode the final kilometres with his team leader the 2017 Giro winner Tom Dumoulin, a third Dutchman in Bauke Mollema, and Davide Formolo.

Mollema attempted and failed to drop the others from 2km out and when the four approached the line together Bouwman’s burst for the win was unstoppable.

“Unbelievable, like my first victory in the Dauphiné, I can’t believe it,” Bouwman said. “It was such a hard day actually, and in the final we were four guys with two of us, and Tom did a superb job in the last 2k.”

“I was feeling quite good the whole day. One time on the climb I had a bit of trouble. It was steeper than I thought but when I started my sprint I felt so much power left. I knew I was getting close to the victory and at 150 meters I looked behind and I had a big gap so, yeah, perfect.”

Saturday’s stage is raced around the great southern city of Naples finishing on the seaside promenade Via Francesco Caracciolo.