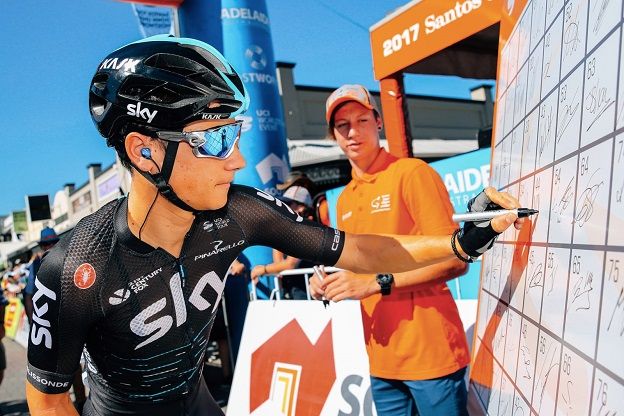 When news first filtered through to Kenny Elissonde and Chris Froome that Owain Doull was under the weather, Chris was quick to point out that his training partner’s schedule might be about to change: ‘Kenny, maybe you’ll fly to Adelaide tomorrow!’ he joked.

The next morning, having put that thought to the back of his mind, the Frenchman was two hours through a tough training ride when coach Tim Kerrison pulled up alongside him in the support car.

‘Erm Kenny,’ he said. ‘This isn’t a joke. You have to go to the airport!’ it became apparent that Owain Doull wouldn’t be able to start the Tour Down Under as he was diagnosed with appendicitis, and it was over to Kenny Elissonde to fill his spot on the team.

He picks up the story: “It was a bit of a shock! I was already pretty tired after riding for two hours on the third day of a three-day training block and I was like ‘Woah, tomorrow I will be on the start line!’

“But at the end of the day Sergio needed a complete team around him and we saw that on stage two – it was the perfect example. We needed everybody there. I’m happy to be here for him.”

The plan was for Elissonde to continue training with Froome in Brisbane and start his season a little later, but once he’d got over the initial shock of being thrown head first into his Team Sky debut the Frenchman revealed his happiness at racing in Adelaide.

He added: “It’s my first time with the team so for sure I am really happy. At first it was a bit crazy but when I came here everyone made me feel very welcome. I’m very happy.

“It’s a really friendly team and everybody is really helpful. It’s a big change, moving to another team, but since it’s a change in culture too it’s an even bigger step. The staff and riders are really helpful though, and it has been great.

“I’ve ridden with Chris quite a lot this winter because we live close to one another so we train together.

“He’s really nice and he always has some wise words and advice. It’s gold for me at my age to have the chance to train with him.”

As for training with Froome, Elissonde has joked to the media that riding with the three-time Tour de France winner is tougher than racing the Tour Down Under.

Having started his debut year with the Team Sky a little earlier than expected, Elissonde is philosophical about his ambitions for the coming campaign. He doesn’t, he says, necessarily want to be judged on results, but his worth to the team.

“For the moment we are just talking about how I should get to know the team and fit in. Each race is an objective – I want to give my best every time I race because I still have a lot to learn from the team.

“Every day I learn something new, so I can’t really say this race or that race is my objective.