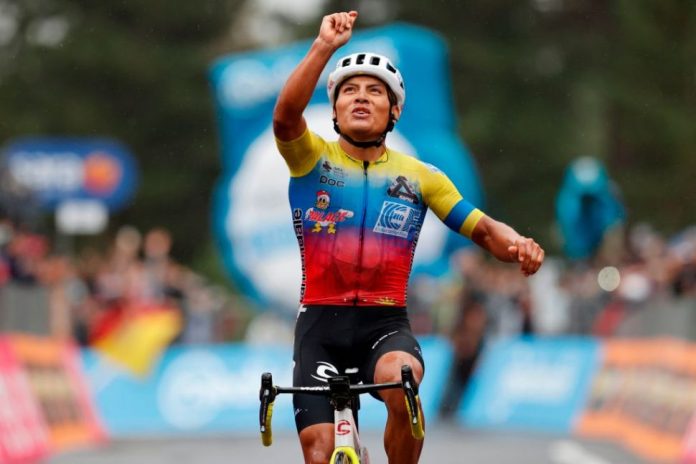 Jonathan Caicedo (EF Pro Cycling) won the first mountain stage of the 2020 Giro d’Italia after he broke away to win at the summit of Mount Etna.

Geraint Thomas hit the ground in the neutral zone before the start and he lost touch with the main pack ahead of the final ascent to Mount Etna, a 18.8km effort at an average gradient of 6.6%.

Thomas ended the 150km stage some 12 minutes behind Caceido, who crossed the line 51 seconds ahead of overall contenders Jakob Fuglsang and Vincenzo Nibali, and 39 seconds before Wilco Keldermann.

On a bad day for British riders, Simon Yates of the Mitchelton-Scott team was dropped about nine kilometres from the finish, losing 3:31 to the other leading overall contenders.

“Today was just trying to hold as much as I could. I knew I had good legs since the beginning – I was feeling good”, said Almeida.

“In the end it was just a sufferfest until the finish. I knew in the final 3km I was feeling good, I would never expect to be in this position and I’m really happy with this. I hope tomorrow morning I will feel this. It will be a really hard task, of course we will do everything we can. We also have strong teammates so I think we can make a good Giro.”