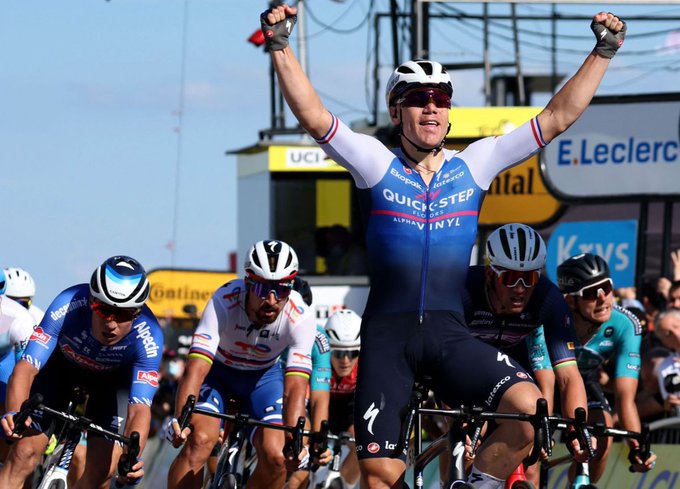 Fabio Jakobsen claimed the second stage of the Tour de France, a 202.2-km flat ride from Roskilde to Nyborg, in a stunning sprint finish after pulling ahead of Wout van Aert and Mads Pedersen on Saturday.

The win capped a remarkable comeback for the 25-year-old after he spent two days in an induced coma in 2020 following a bad high-speed crash during the Tour of Poland.

Jakobsen’s victory was the second in a row for Quick-Step Alpha Vinyl, who also enjoyed Yves Lampaert’s surprise win in Friday’s time trial. It was the team’s 50th stage triumph since their Tour debut in 2002.

“Today is ‘incroyable’ as we would say in French,” said Jakobsen. “For me it was a long process, step by step. A lot of people helped me along the way. This is to pay them back so they can see it was not for nothing.

“I’m happy I still enjoy riding the bike and racing and luckily I can still win. It’s an amazing day and I’d like to thank all the people that helped me to be here,” added Jakobsen.

The finish looked like a two-way tussle between Van Aert and Pedersen but Jakobsen, who was selected ahead of Mark Cavendish, accelerated over the last few metres to take the win in his debut on the Tour.

There was chaos in the closing stages as a huge crash blocked the route but the sprinters ensured a thrilling finale to a stage that offered little drama early on.

“Classic Tour de France stage with crashes and everything. You need to be focused all day,” said Van Aert.

“Second place but really nice jersey in the end. It’s a big day for me, I got some disappointments before but today I’m finally getting it, it’s quite an achievement.”

Sunday’s stage three is a 182-km flat ride from Vejle to Sonderborg.