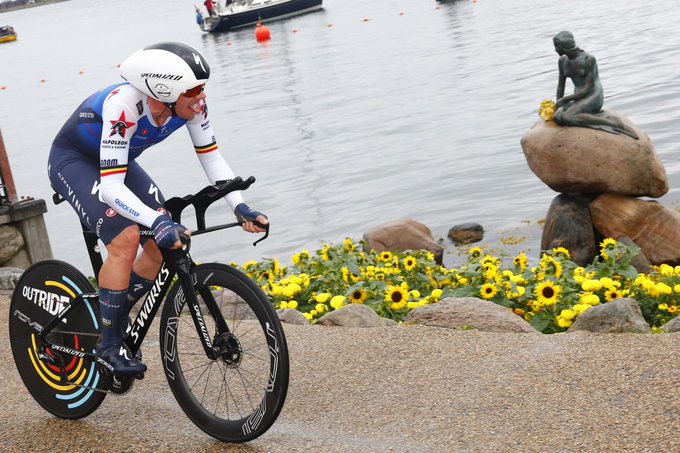 Pogacar placed ahead of his Slovenian countryman and main rival Primoz Roglic, the 2020 runner-up, who was eighth in the time trial.

This was his first stage win at the Tour for Lampaert. He clocked 15 minutes, 17 seconds on the 13-kilometer route around Copenhagen.

The Quick-Step Alpha Vinyl rider was five seconds ahead of countryman Wout van Aert and seven ahead of Pogacar, who leads UAE Team Emirates. Pogacar was nine seconds clear of Roglic.

Lampaert could scarcely believe it when he realized he won, wiping away tears and putting his hands on his mouth.

The rain was teeming when Roglic finished under grey skies, and still lashing when Pogacar set off around 40 minutes later.

Riders set off to loud cheers.

“There was so much noise you could hardly hear anything in the earpiece,” French rider David Gaudu said.

The noise level went up again when local rider Jonas Vingegaard rolled down the start ramp. He placed seventh, one second ahead of Roglic.

Large parts of the Danish capital were shut down. The wet roads made the route treacherous — especially the section across the square of Amalienborg Palace, the main residence of Denmark’s royal family, which is paved with cobblestones. Stefan Bissegger fell off twice, but continued.

The stage went past the city’s other best known landmarks, including the Little Mermaid statue, sitting on her perch at the entrance of the harbor.

A huge series of bridges and blustering winds could play havoc in the flat stage 2 on Saturday.