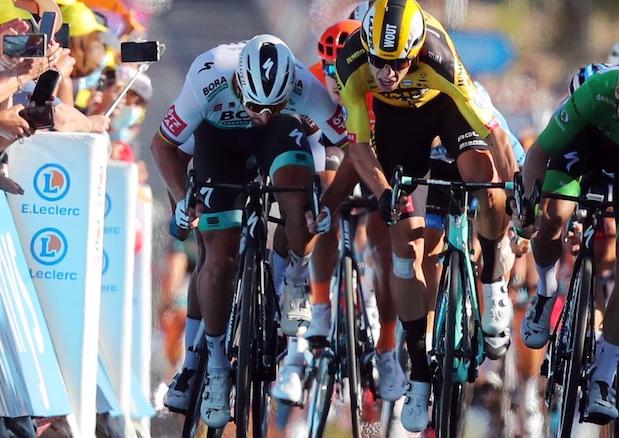 The Tour de France organisers have not step a foot wrong this year yet and things do not look like to change. I was the most confident person believing in a peloton split on the Pond du Grand Belt and I was gladly wrong. Although, a small crash without any consequences occurred within the final 3 kms, the riders looked much less nervous than the last year. While Mathieu Van der Poel was scaring everyone by preserving some energy for the coming stages by staying safe at the back of the peloton, the GC teams did not insist on trapping each other. The whole peloton was brought to a bunch sprint, and there was no doubt as to who is the fastest man on the planet right now; Fabio Jakobsen.

The first thing to be seen in this 182 km stage is as to whether Magnus Cort Nielsen will go out to remain in the Polka dot Jersey. Having already relieved himself of the pressure of getting cheered on the podium by the Danish Crowd, he will most probably stay in the bunch having a serious claim to a stage victory. The sprinter’s team will most likely try to keep things under control.

Having already managed a more tricky situation on stage 2, this stage should, on paper not be of any trouble to them. This is the complacency that could take out some careless riders prior to a very nearly first rest day and transfer into France.

★★★★☆ Mads Pedersen everything was well executed by his team and him after passing  in his home town, he was just beaten by stronger than him. The finish is an uphill drag sprint of 300-400m and if he is as well placed as he was today, Mads will win this type of finish all day and possibly finally wear that yellow in Denmark

★★★☆☆ Caleb Ewan he is without his usual sprint train and he is getting adjusted to this new situation. At one point, it will stick and and the pocket sprinter will remind everyone as to how good he actually is.

★★☆☆☆ Danny Van Poppel there were some interrogations as to why Sam Bennett was not in the Bora-Hansgrohe line-up of the tour. His impressive 4th place finish proved that his team made the right choice as he is more versatile than the Irishman and still possesses some interesting turn of speed

You can follow the race with us as from 12:55 local time on these two links