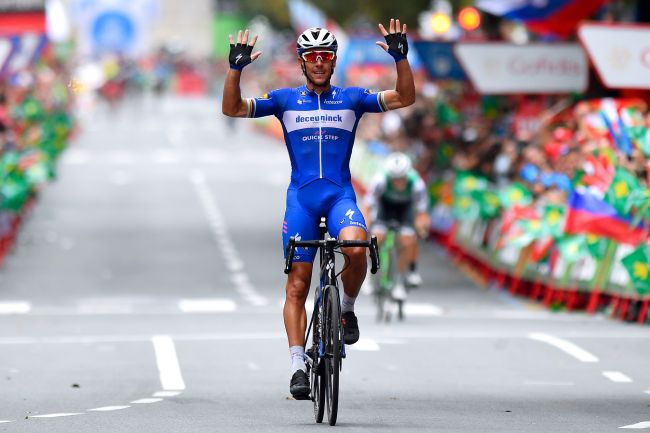 Philippe Gilbert made a solo charge to win the 12th stage of the Vuelta in Basque Country on Thursday, while Primoz Roglic finished in the peloton to hold on to the leader’s red jersey.

Gilbert broke away near the end to comfortably take the victory in the 171-kilometer stage that finished in Bilbao. The Belgian rider finished three seconds ahead of Spaniards Alex Aranburu and Fernando Barcelo.

”It was a long fight to get in the breakaway,” said Gilbert, who now has 10 stage wins in Grand Tour races. ”There have been dozens and dozens of attacks. It was incredible. I must have attacked 20 times myself. It was really intense and painful.”

Roglic successfully fended off an attack by Miguel Angel Lopez to finish safely in the peloton, which crossed the line more than three minutes after Gilbert.

”The team was very strong and did a great job to keep me in a good position in the climb so nobody gained time on me,” said Roglic.

Roglic maintained a gap of 1 minute, 52 seconds to second-place Alejandro Valverde, with Lopez staying another 19 seconds behind. Nairo Quintana was three minutes off the overall lead.

Riders will face several mountain passes in an extremely challenging stage on Friday, including a daunting final climb in Los Machucos.

”Tomorrow will be quite an important stage,” Lopez said. ”We hope to have good legs to do something interesting. Roglic is human. If he were a machine, of course he would be unbeatable. But he is human and we’ll find his weakness.”