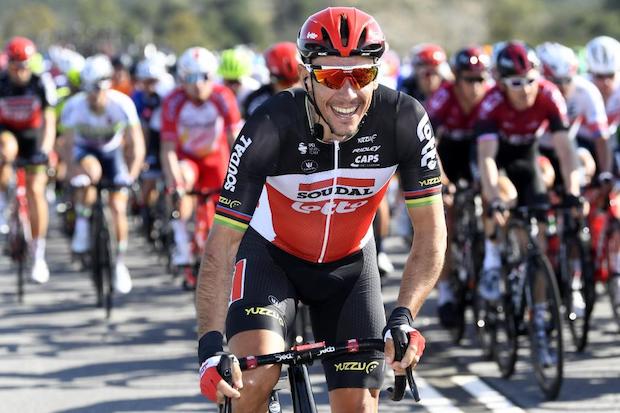 Philippe Gilbert will not ride the Tour of Flanders on Sunday as he has decided to take a break because he’s mentally and physically exhausted.

Gilbert wanted to make a comeback this spring after his Tour de France injury, but in Milano-Sanremo he was not with the best and in the E3 and Gent-Wevelgem he didn’t finish.

“We decided with the team that I was going to take a rest period now because things are not going well,” Gilbert said. “It’s been a few weeks of things going wrong. We took the time to analyse everything we could analyse and the best explanation is that it is a lack of mental and physical freshness.

“I think it’s due to all the work I did after my crash in the Tour de France last year…at the time there was a misdiagnosis of the knee. We did not realise the seriousness of this second fall. It was much more serious than we thought. Maybe I should have ended my 2020 season at that point.”

“After analysis now, I realize that during the internship with the team in January, I was, I think, still at least 20 or 30 per cent behind the group average,” Gilbert says. “I then had a period of doubt, especially because I was putting pressure on myself for Milano-Sanremo, to be ready. So I worked harder to try to come back. I made a lot of physical progress since that stage, but maybe a little too fast too. And now I pay for it. At Nieuwsblad I had a good result but it was more thanks to experience than with my legs.”

“My idea is to do 4-5 days without a bike and then resume training gently. The Ardennes classics are still possible, but it’s still too early to talk about specific things. I want to feel and have my head 100 percent to play a part in the finals. That’s why I compete,” he said.