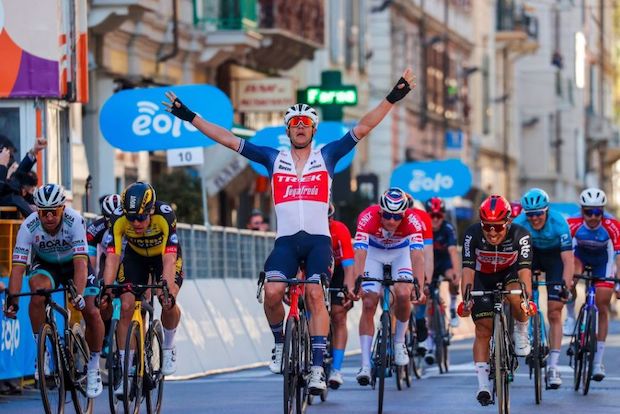 One of the ‘Big Three’ – world champion Julian Alaphilippe, Mathieu van der Poel, Van Aert – was widely expected to prevail on the Via Roma, but Stuyven tore the script and went all in at the bottom of the Poggio hill, two kilometres from the line.

With a group of chasers breathing down his neck, the Trek-Segafredo rider sprinted to the line to claim the biggest victory of his career.

“There were three strong guys and everyone was talking about it,” said Stuyven. “But we had a plan to go for it, to try to win. I felt really good all day and the finale went well. There was a lot of fast guys in the group after the Poggio, so I knew I had to try all or nothing.

“And I did. If it’d had gone to the line I could have finished fifth or tenth but I preferred to go all, so I took the biggest victory of my career.”

Alaphilippe jumped away from the bunch on the Poggio climb, looking to repeat his winning move from 2019 but he could not make a difference and when Stuyven went, the chasing group failed to organise and allowed the Belgian to open up a gap.

As Soren Kragh Andersen, who had managed to join him, faded, Stuyven did not look back and had about just enough to make it to the line to stun the field.