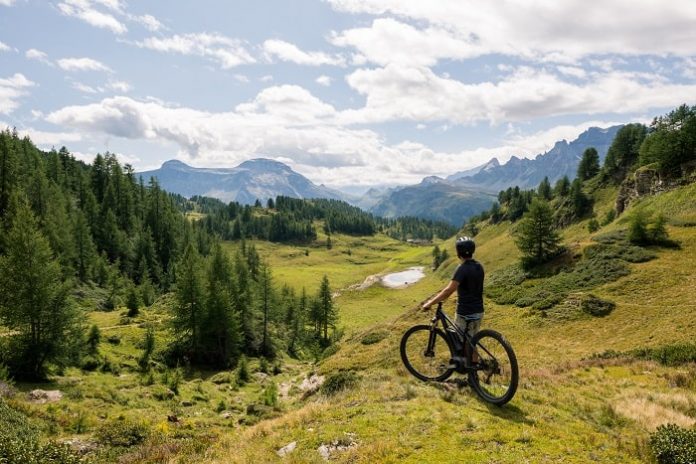 Electric bikes, or e-bikes, have been around longer than most people realize. However, they’ve only recently been making their way into the spotlight as more people switch to cycling as a mode of transport.

E-bikes are energy-efficient, environmentally-friendly means of low-cost transport when compared to most mainstream transport mediums like cars and public transport. So, many people are starting to look into e-bikes as a way to commute around their area. The big question now is, which type of bike should you get?

Regular e-bikes and electric hybrid bikes are the two main configurations. Keep reading to find out precisely how they differ and how to determine which is best for your needs.

As the name implies, an electric bike is simply a bicycle that incorporates electrical components into its functions. The only difference between a regular bicycle and an e-bike is that the latter uses an electric motor to assist with riding.

The term ‘electric bike’ can typically refer to any sort of bicycle fitted with an electric motor. That said, it’ll most often refer to those made to be city bikes. These are generally the most common type of e-bike.

You use an e-bike by pedaling the same way as a regular bike. The difference is that when you pedal the electric motor activates and creates additional propulsion or momentum. In e-bike terms, this is called a pedal assist. This will happen for as long as the battery has power. You can think of it as getting a motorized power boost as you ride.

An e-bike often has some functionality not offered by regular bicycles. Many have a digital display and several settings to give the rider control over speed and how much assistance the motor provides. It should be noted that the motor on most e-bikes will have a maximum speed of 15.5 mph, or 25 kph, in general.

Avid cyclists may not want the power boost, but it can be extremely beneficial to regular commuters as they live their daily lives. Studies have shown that e-bikes are less tiring than normal bikes. For example, when using a bike to commute to work, an e-bike will make uphill riding and longer commutes significantly easier for a rider. In the end, it allows riders to reach their destination with more energy remaining at the end of the trip.

First, you need to understand what a hybrid bike is. There are several different types of bicycles like mountain bikes, commuter bikes, city bikes, and trekking bikes. A hybrid bike is simply a bicycle made with a mixture of qualities from several different types of bikes. The most common type of hybrid is a mix of road and mountain bike features.

As such, an electric hybrid bike is just a hybrid bike that’s assisted by an electric motor. These are also e-bikes. The difference is that they’re usually more specialized for specific terrains.

Electric hybrid bikes are generally more versatile and better suited to longer trips. They aren’t made for any specific purpose other than to be usable across various purposes. As such, they aren’t particularly geared to maximize performance in any one situation.

Rather, they offer good overall usage when cycling on different floors, are comfortable when cycling long distances, and can handle uphill or downhill riding. This makes them a good choice for someone who wants to have one bike they use for everything.

Which One Is Better?

All e-bikes share some common advantages. First off, they produce less pollution per kilometer than most other options of transport. They’re relatively cost-effective after the initial purchase of the bike. Additionally, despite being assisted, e-bikes can still allow the rider to get some exercise during their commute. The biggest question is which type of e-bike is best.

For example, you’d probably feel better using a hybrid bike instead of a road bike to cycle a gravel pathway. On the other hand, both can be used on a road—even though the road bike will likely do a better job.

With that in mind, the best bike for you depends on why you want the bike. A specialized bike is a great choice if you know what it’ll be used for and plan to use it only for that purpose. For instance, a mountain bike is great if you plan on using it only for mountain trails. Conversely, you may be happier with a hybrid bike if you want it to be able to do a few things outside of your regular daily activities.

All electric bikes are simply bicycles that assist the rider with an electric motor. Different types of e-bikes can be specialized for specific tasks. A hybrid bike is a mix of various bikes to create a good all-rounder bike. One isn’t necessarily better than the other. The better bike will be the one that suits your needs.

To find the best electric bike, you should consider what it’ll be used for and find out which type of bike is best suited to that purpose. Look around your area, and see what’s available. Consider your budget, talk to a few dealers, and you should be able to find your new everyday e-bike.