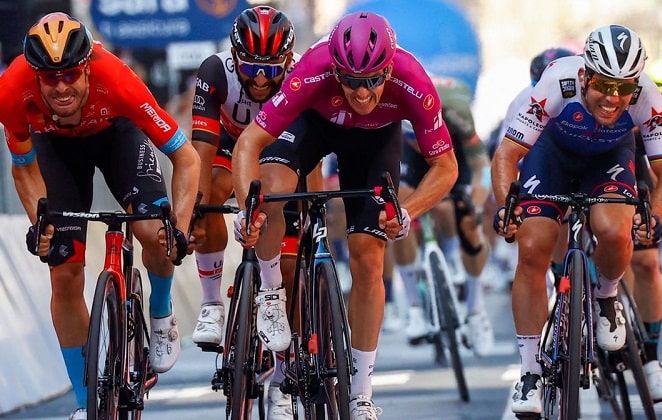 Arnaud Demare won his third stage at this year’s Giro d’Italia with a well-timed sprint at the end of stage 13, a 150km ride from San Remo to Cuneo, on Friday.

You can rewatch STAGE 13 HERE

Juan Pedro Lopez retained his 12-second overall lead to hold on to the pink jersey.

Tagliani was dropped on a climb with 100km remaining but the remainder of the group stayed away and looked like being able to contest for the stage win but were reeled in with one kilometre remaining. Groupama-FDJ’s riders then got Demare into position to claim victory and he duly obliged.

“At some point I started to doubt that we’d be able to catch the breakaway because some elements of my team had given everything they had,” Demare, who secured his eighth Giro win, said. “They were very committed actually. I’ve also had the feeling that I was cooked myself.

“Only with 10 km to go, I’ve started to believe it would be a sprint finish. I was at the limit for sprinting. It’s exceptional to get one more win. Three is a lot.”

Saturday’s stage 14 is a challenging 147km ride from Santena to Torino, which begins with a short flat section before a series of climbs.