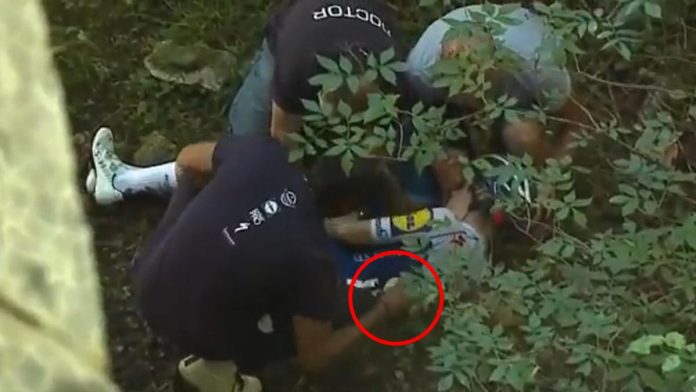 Deceuninck-Quick-Step says it has informed the Cycling Anti-Doping Foundation (CADF) that the object removed from Remco Evenepoel’s pocket after his crash at Il Lombardia was a small bottle containing nutrition products.

“We would like to clarify that we have been contacted by CADF earlier this week to discuss the incident surrounding Remco Evenepoel’s crash at Il Lombardia earlier this month”, a Deceuninck-QuickStep statement read.

As has already been stated publicly, the item that was captured being removed from Remco’s pockets was a small bottle containing nutrition products and was removed in order to help him to be placed more comfortably by medical staff on the stretcher. We have reiterated this to CADF and we will continue to cooperate with their enquires if needed.

With regards to the transmission of data, we would also like to clarify that data such as live location is transmitted by the Velon device that was installed on bikes during Il Lombardia by Velon in partnership with the race organiser. The devices allow everyone, including the fans, to track and see rider data live in the race.

We are confident that this will put an end to any further speculation surrounding the incident.”