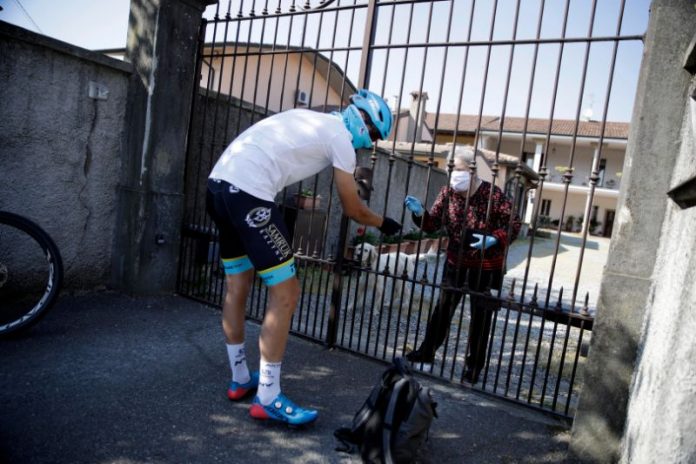 (AP) – There are no fans lining the road. No teammates providing support. And there is no race to win.

Davide Martinelli has achieved a moral victory, though, by using his bike to help deliver medicine to elderly residents and others in need during the coronavirus pandemic.

The service is of great use in Lodetto, Martinelli’s hometown in the hard-hit Lombardy region of northern Italy. The village has neither a pharmacy nor a supermarket.

Martinelli makes a daily trip to Rovato, the next town over, to pick up supplies.

”I’ve got a bike and two legs in pretty good form, so riding 10 kilometers (6 miles) a day is no big deal,” Martinelli said in an interview this week. ”I wanted to help the people who always support me during the season. It’s time to give back to them.”

Martinelli joined up with a Facebook group called ”Lodetto Solidale” (Supporting Lodetto) where those in need can place their requests online, by phone or message.

Martinelli receives his orders each night and maps out a route for the following day.

”I go to the pharmacy and when I arrive outside I put on gloves and a mask,” he said. ”If I go for three or four people, there’s less risk of contagion.”

That’s because Giuseppe Martinelli is one of the most successful team directors in cycling, having guided the likes of Marco Pantani and Vincenzo Nibali to Tour de France victories and a handful of riders to Giro d’Italia wins.

The elder Martinelli said that what his son is doing now is ”a step above a victory for one of my athletes, because it’s gratifying to him and to us because he’s part of our family.”

Still, Giuseppe Martinelli said he had nothing to do with his son’s initiative besides offering fatherly advice: ”I just said, ‘Be careful. Be safe. Don’t touch anyone. Use a mask and gloves when you enter the pharmacy.”’

At 26, Davide Martinelli likely still has his best racing years ahead of him. So far in his career, he has won only two stages in minor races – both in 2016. This initiative has brought him more recognition than anything else he’s done on his bike.

While professional athletes were at first allowed out to train during the nationwide lockdown in Italy, the government ordered them to remain home, too, after the Tokyo Olympics were postponed to 2021.

”But don’t think for an instant that there’s some sort of training strategy behind all of this,” Giuseppe Martinelli said of his son’s initiative. ”Eight out of 10 times he goes out with normal running shoes and his mountain bike. … So we’re talking about 30-40 minutes twice a day and sometimes only once per day.”

That’s hardly even a warmup for pro cyclists, who often ride more than five hours per day.

”I won’t deny that having the chance to be out in the fresh air helps me relax,” Davide Martinelli said. ”Sure, there’s a risk of contagion when I enter the pharmacy, but you can’t dwell on that. When you decide to do something you’ve got to do it without over-thinking it.”