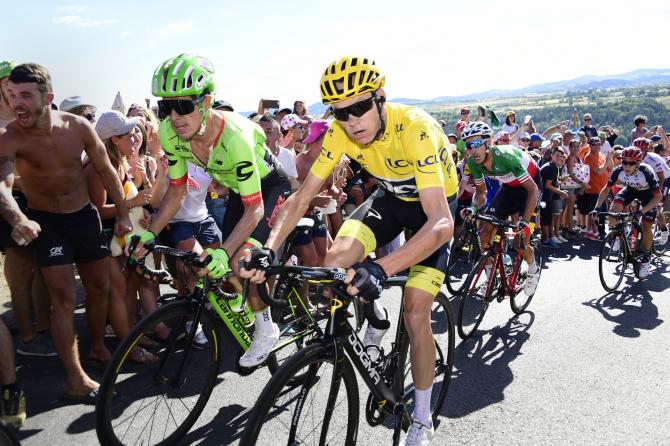 Team Sky ensured the maillot jaune was perfectly positioned amid a nervous peloton and Froome was in a prime position as the bunch split apart with 15 kilometres to go.

“It was quite a crazy stage. With the selection coming not long after that climb with 20 kilometres to go, it meant that quite a lot of the GC guys were actually quite far up in the bunch, ready for that split. So maybe there weren’t the biggest differences on the GC that we could have expected on a crosswind stage, but at the same time I think a few guys on the top 10 – Dan Martin, Louis Meintjes – did get caught out unfortunately for them.

“The rest of the GC guys all seemed there and willing to roll through to keep the positions at the front. I think for myself and Mikel Landa we were just glad to be on the right side of that split.

“I believe these next two days are the biggest consecutive days in this year’s Tour de France. It’s hard to say exactly how selective they will be, or whether it will be a case of the four of us who are all within half a minute just chasing each other’s shadows. Or it could be blown wide open – that still remains to be seen. But on the upside I think both myself and Mikel Landa are feeling great coming into this last week of the race. Certainly for me that was the goal for of my preparations for the Tour – to come into the third week feeling the way I’m feeling now. I’m quite looking forward these next few days in the Alps now.”