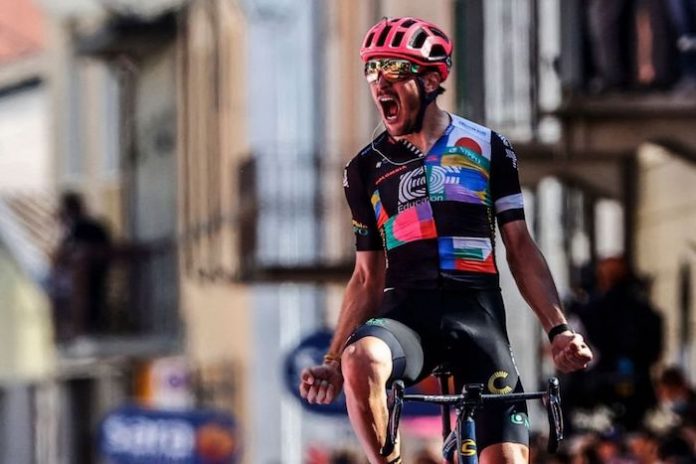 Alberto Bettiol stormed to a maiden victory on Thursday with an impressive attack on stage 18 of the Giro d’Italia, a 231-kilometre ride from Rovereto to Stradella as Egan Bernal safely retained the overall lead.

Bettiol and Remi Cavagna (Deceuninck-Quick-Step) fought for the win on the longest stage of the race before Bettiol caught up on the final ascent and overtook him as Cavagna cracked.

“I really wanted a victory like this. I had already come close on a couple of occasions,” Bettiol said after his team’s first stage win this year.

“It’s always difficult to get into the breakaway in the third week of the Giro, many riders wanted to try to win today. In the finale, so many guys were looking at me and looking for my wheel.

“I was sure that Cavagna would try something. Luckily I caught him and attacked him immediately. I tried to hit him mentally and it paid off.”

A disappointed Cavagna admitted he may have broken away too soon.

“We wanted to take the last opportunity before the time trial. We tried, maybe it was a bit far out… I was mentally feeling good,” Cavagna said.

“I didn’t know how much time I had so it’s a little bit frustrating. It wasn’t easy against everybody in that break today. There were too many good riders and teams, and a lot of teams with more than one rider which never makes it easy.”

The peloton finished about 23 minutes later with Bernal (INEOS Grenadiers) retaining the leader’s Maglia Rosa. The Colombian leads the general classification, 2:21 ahead of Damiano Caruso (Bahrain Victorious) in second. Simon Yates (BikeExchange) is third, 3:23 behind the leader.

Friday’s stage 19 is a 176-kilometre ride from Abbiategrasso to Alpe di Mera.