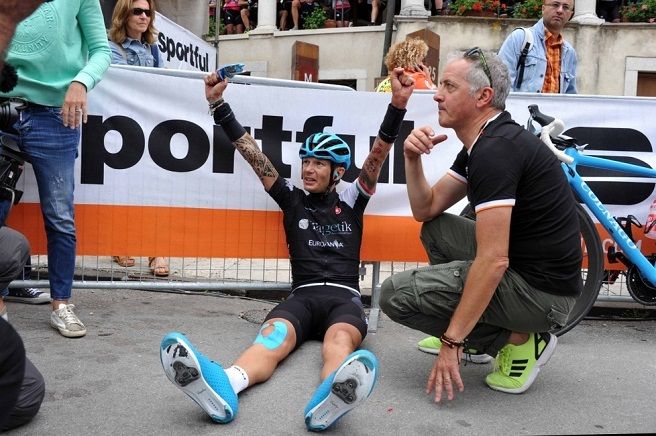 Stefano Cecchini, Italy’s Strava king, wants to turn professional at 38-years-old, but he has to overcome the association with his father, the controversial doctor Luigi Cecchini.

Stefano Cecchini has the fastest Strava times on the Gavia Pass and Rombo Pass, and the second fastest behind Marcel Wyss on the Stelvio Pass. The Italian rider was just one minute slower than Vincenzo Nibali‘s Giro d’Italia time on the Passo Giau.

“In the last three years, I’ve won 10 [gran fondos], all of the important ones,” Cecchini told La Gazzetta dello Sport. “I already live the life of a pro. If I didn’t do so, I wouldn’t even win one gran fondo. Maybe I’m an idiot to train so much, six days a week and on the rollers, but I like riding so much.”

“If someone talks of doping, my response is clear,” Stefano Cecchini said. “They can come and test me when they want. I have nothing to hide. And whoever doesn’t believe in my times can check Strava.

“It all began this summer in Livigno. A WorldTour team, one of the biggest, came calling after they saw the time that I rode up the Giau on the Wednesday before the Maratona dles Dolomites. I was only one minute off of Nibali’s time in the Giro. They tested me on three climbs, got my data, but then after that, it went quiet because they were afraid of the name I bring.

“Nippo – Vini Fantini and Androni were interested, but they are afraid it will cost them their invitations to race the Giro d’Italia. Now, I’m dealing with one top Professional Continental team and one foreign WorldTour team.”