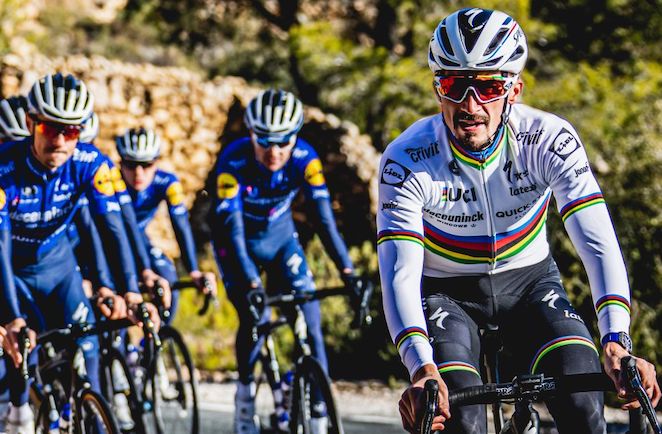 Deceuninck-Quick-Step has announced the seven names that will start on Thursday in the Tour de La Provence, the first race of the team in 2021.

World champion Julian Alaphilippe will make his season debut in the French race. For Alaphilippe it will be his first appearance since the Tour of Flanders, where he sustained two broken metacarpals in a collision with a motorbike.

“I like that I can kick off my season in France in the rainbow jersey. The course suits me, so it was a good option. My goal? I do not know. I have to rebuild my form for the big block of races that will follow. ”

Because several races have been canceled or postponed, Deceuninck-Quick-Step had to change the team.

“With so many races cancelled or postponed, we had to make some changes in our line-up, that’s why we have a Classics-orientated team for next week,” said Deceuninck-Quick-Step directeur sportif Geert Van Bondt.

“We’re happy to get the season underway and to have Julian show his rainbow jersey for the first time this year in France. The guys are feeling good, they are all motivated, and we are confident that this solid squad is capable of fighting for some nice results. Our main goal is to give our best there and get back that racing feeling that we love and have missed so much.”