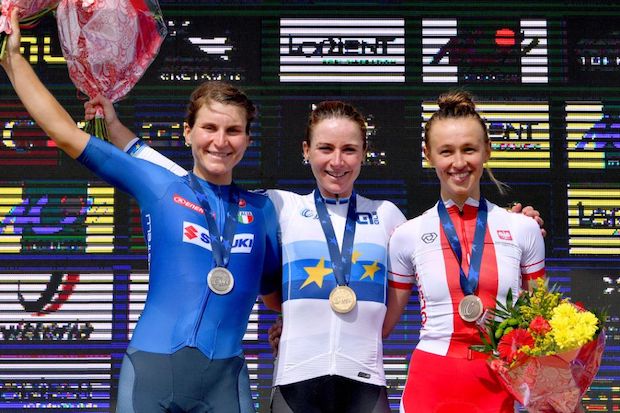 Dutch and Italian reams proved the strongest during the 109-kilometre elite women’s race. The Netherlands boasted seven of the 23 riders featuring in a breakaway at the midway point of the race, which saw the peloton tackle eight laps of a 13.6km circuit.

A crash in the front group with 40km to go impacted Denmark’s Cecilie Uttrup Ludwig, Germany’s Lisa Brennauer and Britain’s Lizzie Deignan, the latter of which came into the race fresh from winning the GP de Plouay on Tuesday (August 25).

The trio were soon joined by Chantal van den Broek-Blaak, giving the Dutch team two riders in the move.

Several attacks were made on the last lap of the circuit, but the quartet entered the final climb together. Longo Borghini launched the final attack of the race to open a small gap with Van Vleuten.

The Italian was unable to hold off her rival, with world champion Van Vleuten sprinting to victory in a time of 2 hours, 50min and 46sec.

Racing will conclude tomorrow with the men’s and women’s junior road races, as well as a mixed relay competition.