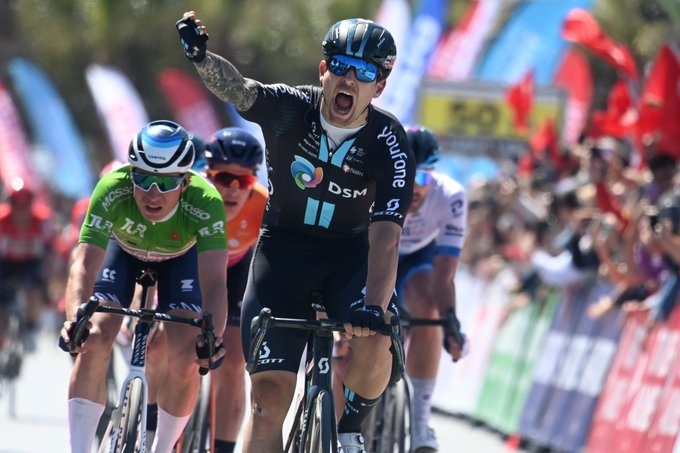 Sam Welsford has claimed his first professional win on stage five of the Tour of Turkey in Ayvalik.

The 26-year-old Australian, who switched from the track to road racing after the Tokyo Olympics, used his track speed to overtake Jasper Philipsen in the final 100 metres. Both men had surged past Caleb Ewan, who eased up to finish in seventh place.

A crash inside the final kilometre took down several riders but Eduardo Sepulveda, winner of stage four, holds on to the leader’s turquoise jersey.

Welsford’s victory gave Team DSM their first win of the 2022 season and continues the success of Australian riders in Turkey after Ewan and Kaden Groves won the opening two stages.

“This is my first pro victory, in my first season in the pro peloton, and I’ve really been enjoying it so far,” Welsford said.

“Team DSM have been really hungry to win and we’ve been going step by step. The win today has been coming, so really happy for the team and for myself,” he said.

“I knew it was pretty close coming into the last 150 metres. I was actually quite far back and so I followed Philipsen through a gap and it opened up in the middle after a lot of guys went quite early.

“I just saw the line, put my head down and I couldn’t believe when I crossed the line first.”