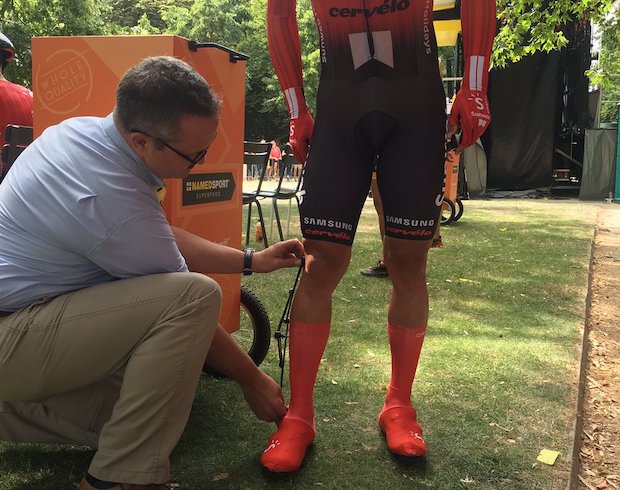 The UCI has added random sock checks at the Tour de France to bolster the checks they have been carrying out before stages.

“These checks have been doing on all year, but because it’s the Tour de France I think it’s the first time the general public have noticed it”, said Nicolas Roche.

“In the event somebody might get past the rule by pulling their socks down a little bit before they’re measure, they even have random checks at the finish. It’s ridiculous. Our sport definitely has more important issues than sock height.”

The rule has been reintroduced this year as part of the UCI’s crackdown on clothing being used to gain an aero advantage.

The insistence on policing sock heights has not been a wholly popular stance, particular with cycling fans on social media.

(Neuville-en-Ferrain, France) In a shocking development that has rocked the Tour de France to its very core, border officials announced the discovery of hundreds of non-regulation socks in a car driven by a soigneur from an unnamed team. Police reportedly conducted raids on several team buses in the hours that followed, and multiple riders were escorted out of their hotel by French gendarmes to undergo a battery of sockdoping tests. Several hours later, a second car was reportedly discovered carrying hundreds more pairs of 8” wicking nylon/polyester garments. The incident, christened “Operación Socko” and “The DeFeet Affair” by local media, produced immediate calls for the accused riders to withdraw from the Tour, but as of press time no riders have yet announced their departure. A rumor spreading this afternoon indicates a likely mass protest by the peloton tomorrow, as many riders announced plans to ride sockless in solidarity with their embattled colleagues. (This story is developing…) #cycling #roadbike #bikerace #cyclinghumor #sockdoping #cyclingmeme #bikememe #letour #cat3 #cat4 #cat5 #cat3memes #lesmemesdutour