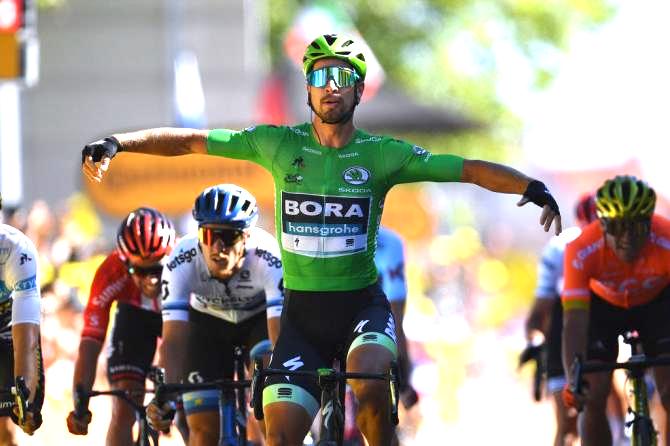 The three-time world champion posted a 12th career stage win at the Tour, emerging victorious from a bunch sprint in the eastern city of Colmar at the end of a 175.5-kilometer (109-mile) trek through the green forests and hills of western France’s Vosges mountains.

“I just have to ride with passion and the victory comes,” Sagan said. “I have to say thanks to all my teammates. They have done a great job and finally we have the Tour de France victory that we were looking for. It’s very nice for us. We controlled all day, on the flat part and towards the finish. I did my best. Everyone needs good luck and a good day for winning.”

The sprint was not contested by pure specialists, who got dropped over the four climbs on the day’s program.

Alaphilippe finished in the main pack alongside other main contenders including defending champion Geraint Thomas, with no change at the top of the overall standings.

The stage got off to a lively start and a group of four riders managed to break away from the pack following a series of unsuccessful attacks.

Mads Würtz, Tim Wellens, Toms Skujins and Simon Clarke collaborated well and built a two-minute lead over the peloton. The pace at the back of the race picked up in the second half of the stage but the quartet went over the summit of the Cote du Haut Koenigsbourg with 1 minute, 45 seconds on their pursuers.

Skujins attacked in the Cote des Trois Epis — a 4.9-kilometer climb at an average gradient of 6.8 percent — to drop his breakaway companions with a sustained effort. The Latvian rider’s lead over the main pack was reduced to one minute at the top and he was caught in the final difficulty on the program, the Cote des Cinq Chateaux.

Hostilities between the race favorites are expected to start during Thursday’s first key stage to the Planche des Belles Filles, a leg-breaking climb likely to reshuffle the standings.