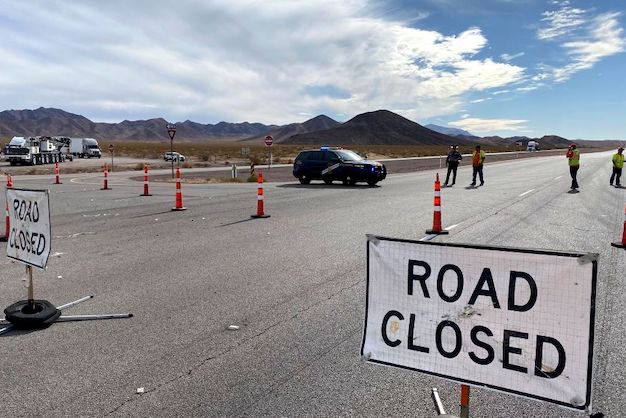 A group ride of 20 bicyclists meant to celebrate the retirement of one of the participants turned fatal Thursday morning on U.S. Highway 95 in Clark County, Nevada when a truck hit the group.

Around 9:40 a.m., a box truck struck the group of about 20 bicyclists. Four men and one woman died at the scene, according to authorities.

Video from the scene showed a white box truck stopped on the side of the highway with front-end damage.

The box truck remained at the scene for several hours after the collision, as authorities investigated what caused the crash.

“It doesn’t appear to be impairment,” Nevada Highway Patrol spokesman Jason Buratczuk said. “It appears to be a tragic accident.”

Clay Weeks, an employee at the Pro Cyclery bike shop, knew many of the cyclists involved in the tragic crash.

“They were on a retirement ride for one of the community cyclists,” Weeks said. “We’ve talked to a couple people who were on the ride. Obviously everybody is super upset and distraught. It’s pretty horrific that something like this would happen. There’s really no words.”

“That shoulder on the side of that highway is wide enough to fit three cars,” Weeks said. “We don’t really know how somebody managed to get that far off the road. These were all very very experienced cyclists. It’s not like they accidentally rode off and into the road.”

“These are people who ride 10,000 miles a year. Some race professionally,” Weeks said. “How did something like this mistakenly happen?”