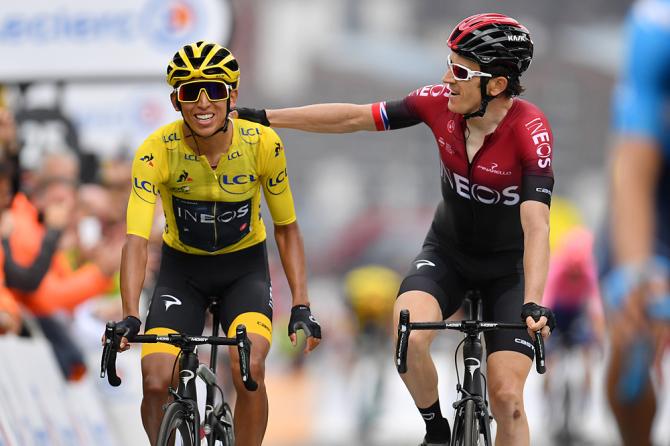 (AP) – With the Tour de France pushed back to a late August start, race director Christian Prudhomme is hoping cycling’s showcase event can help bring back a sense of normality to a nation reeling from the coronavirus pandemic.

Organizers on Wednesday announced new dates of Aug. 29-Sept. And Prudhomme is still optimistic that the three-week event will be able to feature its usual scenes of thousands of fans packed along the route each day.

”Lots of people smiling, getting back to the lives we love,” Prudhomme told The Associated Press in a phone interview. ”Usually we like to complain and moan about things. Then, when they’re gone we realize what we’re missing. The Tour de France will likely be the first big sporting event of 2020. So there will be fervor and enthusiasm.”

Prudhomme said organizers opted against having the start in early August, saying it was wiser to push back ”as far away as possible from the pandemic” in the hope that social distancing restrictions will have eased.

While there is a big gaping hole in the global sporting calendar for the coming months, the schedule in France is suddenly looking very busy.

The start of the Tour in Nice overlaps with the end of the European Athletics Championships, which are still set to be held in Paris from Aug. 25-30. The Tour then ends on Paris’ famed Champs-Elysees avenue on the same day the rescheduled French Open tennis tournament starts a few miles away at Roland Garros.

A cooler one than Tour riders are used to, as well. The temperatures in September aren’t likely to be as hot as in July, meaning riders may have a bit more energy on those tough mountain climbs.

”Of course that’s totally possible, because in mid-September there won’t be a heatwave up in the Alps,” Prudhomme said.

The Tour was set to start on June 27, but those plans were scrapped on Tuesday because of coronavirus restrictions. The International Cycling Union announced the Tour’s new dates on Wednesday. It also said the Giro d’Italia and the  Vuelta will take place after the French race.

Geraint Thomas, the 2018 champion, said it’s crucial for cycling that its flagship event is able to take place.

”A big reason why a lot of the teams are in the sport is because of the Tour, because of the coverage you get from it, it’s so big. The fact that it’s got a good chance of going ahead is great news.”

The UCI also announced that the dates for the world championships will still take place Sept. 20-27. That will be followed by the Giro, initially scheduled for May, and the Vuelta, which is also owned by ASO and had been set to run from Aug. 14-Sept. 6.

No official new dates have been given for those two races.

All the prestigious one-day road classics, including the Paris-Roubaix over the cobblestones, the Liege-Bastogne-Liege and Milan-San Remo, will go ahead but dates are yet to be decided.

”I’m really happy to finally have a calendar,” said French cyclist Julian Alaphilippe, who led last year’s Tour for long spells before finishing fifth. ”It’s a light at the end of the tunnel, which is something good for the morale in times like these … It gives you an extra boost to work harder in order to be fit for when the moment will come.”

Prudhomme said riders will need two months to prepare for the Tour, including one or two races warm-up races. The postponed Criterium du Dauphine could move to early August and be shortened from eight days to five or six, he said, with extra climbs to prepare riders for the Tour.

Racing without fans lining the roads and mountain passes of France is an option which has prompted debate, and will continue to do so while distancing requirements are still in place.

”Of course we’ll respect the guidelines from the health minister,” Prudhomme said. ”Logic states that there will be less people on the roads during that period, less tourists, less children on school holidays.”

Postponing the initial Tour dates became inevitable when French President Emmanuel Macron announced on Monday that all public events with large crowds would be canceled until at least mid-July. He extended France’s lockdown to at least May 11.