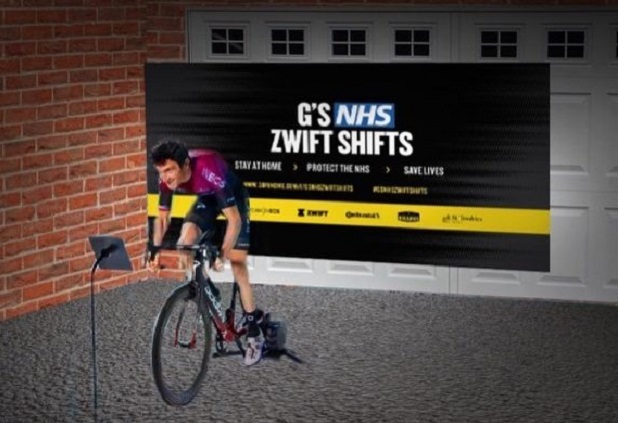 (Reuters) – Geraint Thomas expects his 36-hour shift on an indoor bike to be tougher than the Tour de France but worth the effort to raise money for Britain’s National Health Service (NHS) workers during the COVID-19 pandemic.

The 33-year-old Welshman began the first of his three 12-hour stints on the online virtual cycling and running platform Zwift from the confines of his garage in Cardiff on Wednesday.

“Going up Alpe d’Huez and (Mont) Ventoux would be easier for sure… it’s just so mundane here,” Thomas said.

“Obviously, I’ve got some things going on, a few interviews, I’m on Zwift and I can ride with people, but 12 hours just stuck in a garage is totally different to riding on the road.

“At least going up Alpe d’Huez you’ve got all the hairpins and writing on the road… this is a challenge in itself.”

Thomas said that he was “a bit nervous” about riding for 36 hours, the equivalent of several stages of the Tour.

“This morning when I woke up, I was a bit like ‘phwoah, what am I doing?’ But to see all the money coming in makes it all worthwhile,” Thomas added.

“I saw all the stuff in the news and I have a few friends and family that are involved and, yes, just the sacrifice that everyone is making I think it’s amazing and I really wanted to make a small difference myself.”

“I was in France until towards the end of March and I was training really well and staying positive and thinking of the next races,” he added.

“But as the weeks went on, they were getting cancelled, came back here and had a little break because I’d done quite a lot of training… it’s just tough mentally to stay switched on because you don’t know exactly what (event) you’re going to be racing next.”