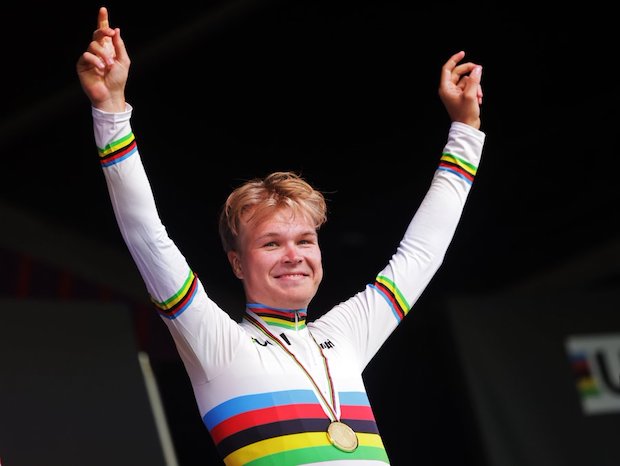 Tobias Foss said he was in “some kind of a dream” after pulling off a huge upset Sunday to dethrone two-time defending champion Filippo Ganna and claim a maiden men’s time-trial title at World Championships in Australia.

The 25-year-old conquered the 34.2 kilometres circuit in 40min2sec to edge Stefan Kung by 3sec.

Remco Evenepoel, fresh from winning the Vuelta a Espana this month, was 9sec adrift in third on the opening day of the championships at Wollongong.

Ganna started strongly on the hilly and twisty circuit as he sought to match Tony Martin and Fabian Cancellara as a three-time winner. But the 26-year-old tired and faded to finish seventh, 56sec off the pace. Tadej Pogacar came sixth.

Foss won the Tour de l’Avenir in 2020, but was not among the favourites and admitted he was stunned by the win.

“This is some kind of dream, I don’t believe it, it’s so unreal,” he said. “My legs were really good … I was confident I was in good shape, but this is more than I can dream for.

“If I had been top-10 today I’d have been really satisfied. And even top-five I was hoping for, so to wear that rainbow jersey will be really special.”

Last year’s runner-up, Wout van Aert, was a notable absentee. Van Aert has opted to focus on the elite road race next weekend where he aims to topple two-time champion Julian Alaphilippe.

Earlier, Ellen van Dijk successfully defended her women’s time-trial crown in 44min29sec on the same course as the men.