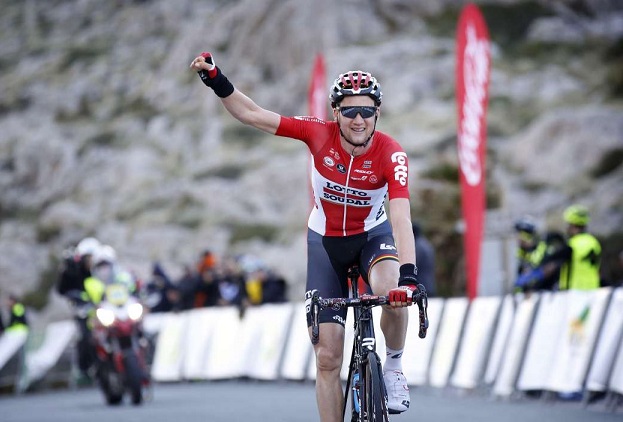 Tim Wellens (Lotto-Soudal) has secured his second consecutive victory in the Challenge Mallorca.

A breakaway of eleven riders was formed early on the stage to the Mirador d’es Colomer. They got an advantage of just over four minutes, but that dropped quickly. Before the top of the Puig Major they were all caught.

From then on 55 kilometres were left. There were a few attacks, but eventually all would be decided on the three-kilometre long climb at the end. Tim Wellens accelerated at the bottom and he could stay ahead until the finish. Alejandro Valverde was second. Tiesj Benoot finished third and Louis Vervaeke fourth, also nice results for the two Lotto Soudal riders.

“I really hadn’t expected this. It was the plan that I would attack at the bottom of the climb and would go over my limit, so the others would need to do that too.”, said Wellens. “Afterwards Tiesj Benoot and Louis Vervaeke had to attack. Just like yesterday our team took control of the race. After the Puig Major Bart De Clercq and Tomasz Marczynski attacked. We wanted to isolate Alejandro Valverde and that was a success. Frederik Frison brought us in the perfect position to the bottom of the climb and then I attacked. This was once again a team performance. Everyone contributed to this victory.”

“It’s wonderful to beat Valverde on such a finish. In the sprint he would have been faster. I find this second win even more beautiful than the one of yesterday because there was more tension. I won’t race tomorrow, but I might go and cheer for the boys to conquer that fourth victory!”