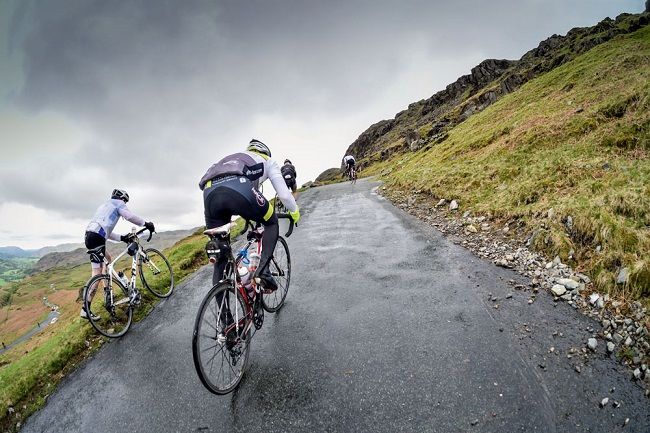 You know that burning feeling you get 10 minutes into a hard climb? It shouldn’t be there. It’s your legs telling you that you’re burning too many matches too early—and if you’re not careful, you’re going up in flames before you reach the top. Sure, you can go all Jens and tell them to “shut up,” but honestly they’re probably going to win that argument. And there’s a better way.

The biggest mistake cyclists make on climbs is going into the red too early, even if they don’t mean to, because they feel fresh and their heart rate is still low. But when you amp up your intensity, it doesn’t take long to generate far more lactate than you can clear and use. And once you’ve pushed past your threshold, it’s very difficult to recover while you’re still fighting the forces of gravity. So you slow to a crawl—not good. Here’s how to make every climb faster and more fun.

Switch gears. Sounds obvious. Yet many riders roll onto a hill pushing a big gear because of that fleeting fresh feeling. When you mash a monster gear your legs need to call in the fast twitch fibers, which suck up energy far more quickly than the slow twitch endurance fibers, create tons of lactate, and fatigue relatively quickly. Find a gear you can spin at least 70 rpm and keep shifting to keep your cadence in that range.

Engage your core. You’ll get to the top faster and stave off fatigue longer if you climb hills with more than just your legs. Bend your elbows, flatten your back, lower your torso, and pull through your core to put more power in your pedal stroke without bathing your legs in lactate.

Stay seated. Standing to stretch your legs and put down extra power when the pitch gets steep is good. But it also makes your heart rate rise and uses about 10 percent more energy, so use the standing position sparingly.

Switch positions. Keep your climbing muscles fresher by shifting positions in the saddle. When you feel the burn creeping into your quads, push back further on the saddle to recruit and leverage more force from your glutes.

Say something. You want to aim to climb right at threshold, which is your sustainable upper limit. That’s about a 7 to 8 on a 1 to 10 scale. The best way to know you’re there is opening your mouth and saying something. If you can speak in short phrases, but not long soliloquies, you’re there. If you’re gasping for air, you’re going too hard. Save that for end.