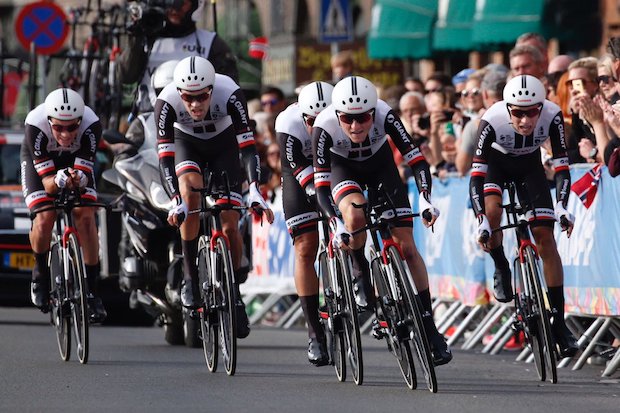 Team Sunweb achieved the double at the Road World Championships when their men’s and women’s teams won the team time trial events on Sunday.

Even though Team Sky set the best time at the first intermediate point, the British formation lost time as the kilometres passed and by the second intermediate spot it had already lost two of its members along with several seconds. At the end of the day, the course showed to be too difficult for the Chris Froome-led team,  Team Sky finishing third.

“It’s crazy, first the women this afternoon and then us”, said Tom Dumoulin. “The team was so homogenous, it was absolutely amazing. Normally you’d say that I was the best time trialist on paper but with this team it was so smooth and we had a really good pace and kept it all the way to the line.

“We tried to keep it together especially on the long climb with around 10km to go which just worked out. We were all flying – I don’t have the words. It’s really unexpected but very nice. We knew that we were doing a good time trial but didn’t know the time splits until the finish. It was so close and so tense with BMC but we made it at the end. It’s the team event of the year and we pulled it off.”