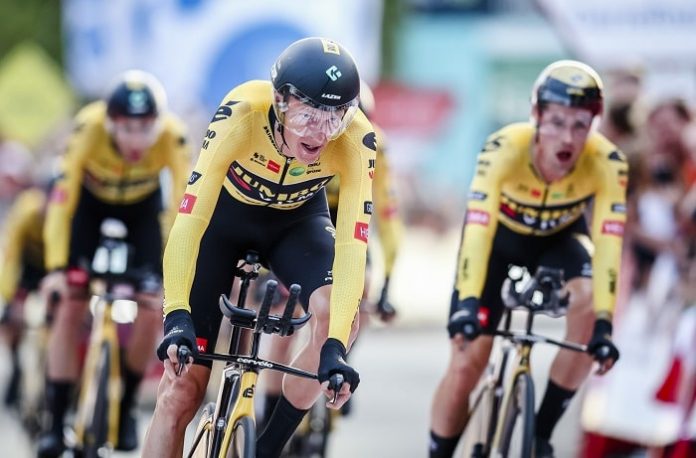 Jumbo-Visma won the team time trial on the opening stage of the Vuelta a Espana on Friday, edging Ineos by 13 seconds with Quick-Step Alpha Vinyl in third after a winding 23.3km run around the Dutch city of Utrecht.

Huge crowds packed the roadsides along the entire route on this first of three days in the Netherlands before the Vuelta transfers to the Basque Country on Monday.

“I’m really grateful to the boys,” said the 36-year-old Gesink. “Being in the red jersey is the highlight of my career. Usually my job is to help the boys so this is a beautiful way for them to say thank you for all that.”

Three-time defending Vuelta champion and race favourite Roglic crossed the line in second. His main rival is expected to be Remco Evenepoel and the 22-year-old Belgian zipped over the line ahead of his Quick-Step teammates.

“We could hardly keep up with him,” world champion Julian Alaphilippe said. “We’ll give it all for him and we have no regrets here today.”

Quick-Step were third on Friday by less than a second behind Ineos who are led on this Vuelta by Richard Carapaz, who announced earlier in the day that he would join team EF next season.

“This was good work done and it motivates us for the rest of the race,” Carapaz said.

Bike-Exchange leader Simon Yates had the disadvantage of going down the ramp early shortly after a shower had left wet patches on the otherwise immaculate road surfaces. The Briton only lost 31sec on his title rival Roglic on the day.

“We gave it what we could,” said a disappointed looking Yates. “The road was quite wet in some places, which made it tricky coming out of the corners.”

Saturday’s stage 2 is a 175km run that also finishes in Utrecht, where a mass bunch sprint finale is expected.