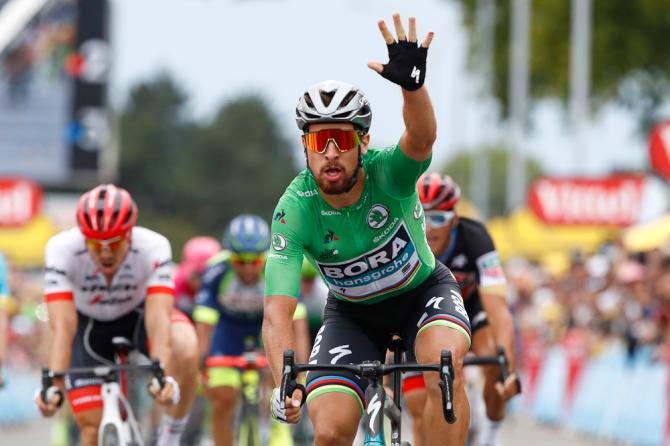 Sagan won a sprint finish to claim Stage 13, a 169.5-kilometer leg from Bourg d’Oisans to Valence in less than four hours.

“This stage was a piece of gold for us,” Sagan said, comparing Friday’s relatively flat to the three previous days in the Alps, which saw several of the event’s top sprinters miss the time cut.

“It’s fantastic. I mean also with the flat stage and a flat stage everyone recovered a little bit in the group. I think everyone was happy that it was a relaxed stage. I’m very happy to have won today. It was very nice for me, and thanks to all my teammates, who did a very good job.”

After overzealous fans marred Thomas’ win on Thursday atop the Alpe d’Huez peak, the otherwise complete calm of Friday’s leg was briefly disturbed by a man on the roadside who tossed a smoke bomb into the center of the peloton as it passed by with 16 kilometers left.

Besides spitting out yellow smoke, the bomb appeared to do no harm.

Thomas had no trouble maintaining his advantage of 1 minute, 39 second over defending champion Froome on the flat ride that came after three grueling days in the Alps.