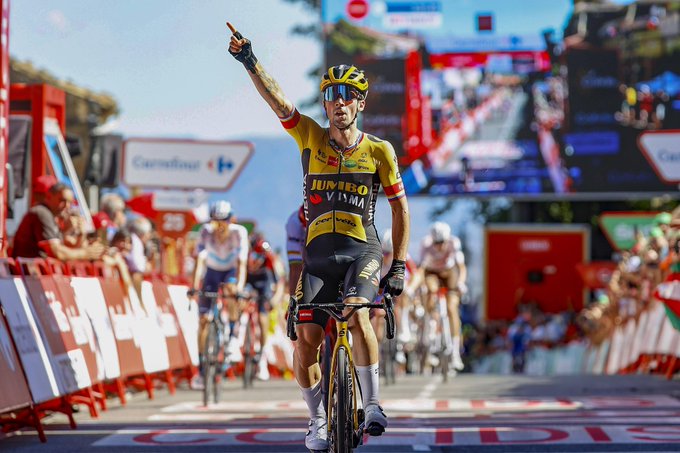 Primoz Roglic took the overall leader’s red jersey at the Vuelta a Espana on Tuesday after he stormed to victory on stage four, a 152.5km ride from Vitoria-Gasteiz to Laguardia, with a stunning late effort.

The Jumbo-Visma rider exploded with around 300m to go on the uphill finish, rolling past Mads Pedersen of Trek-Segafredo to secure the win. Enric Mas claimed third place for Movistar ahead of French duo Quentin Pacher and Pavel Sivakov.

Roglic holds a 13-second advantage over Sepp Kuss in the general classification, with the American finishing 12th to stay within touching distance of his team mate.

“I’m super happy but it’s really just the beginning of the race,” said Roglic, who is chasing his fourth straight Vuelta crown.

“It’s always better to have some seconds ahead than to be behind. It was already a hard pace all day – a super-fast stage. In the final there was an opportunity to fight for the stage win – and I had the legs so I gave it a go.”

The win dispelled any doubts over Roglic’s form coming into the race, with the 32-year-old seemingly having overcome the serious injuries that forced him to abandon the Tour de France after stage 14.

Earlier, Alexey Lutsenko, Alessandro De Marchi and James Shaw were the three survivors from the early six-man breakaway group but were eventually hauled in by the peloton with around 35km to go in a stage that passed without any major incident.

Wednesday’s stage five is a 187.2km ride from Irun to Bilbao.