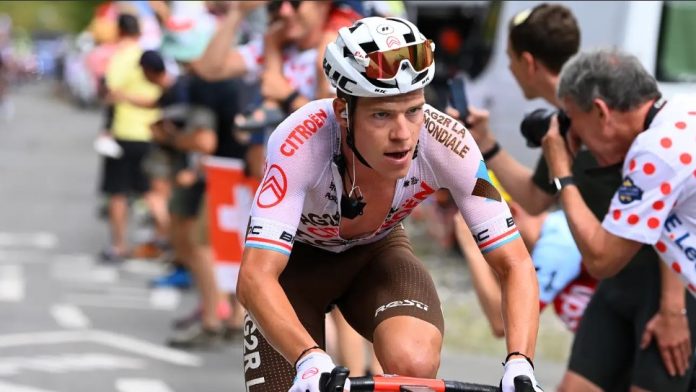 After having witnessed Primoz Roglic stamped his authority and sent out a message to all his opponents, the peloton will be climbing further kilometers in La Vuelta a Espana 2022 stage 5.

With up to 19 points to be awarded in the Mountain Classifications, there are quite a few riders who have lost time on purpose earlier to be allowed in the break either to gain more mountain points or get a stage win. Some closer to the Red jersey will on the other hand be aiming for the lead of the race, something that Jumbo-Visma would not mind. Indeed La Vuelta a Espana 2022 stage 5 looks set for a first breakaway win.

This is the typical stage profile for a breakaway, but as we have witnessed in the Giro and the Tour, cycling has changed. Riders are no longer allowed to attack and roam freely from the start. If we go along what we saw in this new cycling era, the first 100km will be constant attacking with riders trying to get into break and teams missing out chasing.

An early truce could also be found and riders allowed to ride off into the sunset, particularly with much much harder mountainous days coming up. After 100km, the climbing begins with 3 category-3 climbs and 2 category-2 summing up to 28 km of pure positive terrain

Rein Taaramae and Kenny Elissonde both animated the Vuelta earlydays last year by wearing the Polka jersey and even the Red jersey. However things look slightly different this year as they both lie within less than 2 minutes of the red jersey. They might be allowed to go in the break but it depends on their personal ambition in the Vuelta as to whether they would prefer to save their energy to aim to follow the best guys in the harder days coming up.

Team Intermarche Wanty Gobert have other options and Jan Hirt seems a their best bet.Not sure as to why he is already 20 mins down, but if he is fit and gets into the breakaway it is very unlikely to find someone to beat him.

Trek- Segafredo could instead turn to their other Frenchie, Julien Bernard, expert breakaway this stage suits him perfectly and don’t be surprise to see a red hot Mads Pedersen accompanying him to get some sprint points and hopefully snatch the green jersey from Sam Bennett.

Team Cofidis will make sure to be represented in the break and the most likely guy seems to be Jesus Herrada. Team Alpecin- Deceuninck will take nothing less than a man in the break away. Xandro Meurisse is a very versatile rider that will be taking his chance although the most likely and expected guy is Jay Vine.

The whole of the remaining Lotto-Soudal team are breakaway experts and could be in the break but Fillippo Conca, Cedric Beullens and Thomas De Gendt seem more inclined. Harry Sweeny is the best hope however.

Team Israel Premier Tech is fighting relegation as well and will be looking for a stage win. Patrick Bevin seems like a good option for a win but their biggest weapon, if he carries the form he showed briefly at the Tour, is none other than Chris Froome. Movistar is also threatened by relegation ad could try something with Gregor Muhlberger and Luis Mas.

The french team of FDJ- Groupama and Ag2r Citroen have some pretty serious guys who would excel in a stage like tomorrow. On top of that list is Thibaut Pinot, already down by 6 minutes, this stage will be the first of many we will see him try to win. He might also expand his ambition with so many KOM points available.

Ag2r possesses a little venom in the name of Andrea Vendrame, he is a fast finished who can get over climbs pretty decently. He showed some of his talent by getting into 4 breakaways. 3 of them were winning ones with him finishing 5th, 8th and 11th. We are unsure as to whether Bob Jungels is here only to protect Ben O’connor. Knowing Vincent Lavenu, he will take a stage win now first and Bob Jungels is a rejuverated rider who could bring him success.

Alexey Lutsenko was in the break for stage 4. His chances depends on his team ambition as to whether they might contemplate the idea of chasing the break to set up Vincenzo Nibali for one final attack or not. If he is in the break and he is the man to beat.

His main ambition will be the red jersey but Luis Leon Sanchez will not say no to a stage win.

No this is not 2016 and his name is not up here just because of his superiority. Back from hell, the 2 times Vuelta winner showed some decent in break away in the Tour de France prior to abandonin due to a positive Covid-19 test. If he has brought some this form to Spain, he is seriously contender for this stage win.

The 31 year old from Czechia impressed enormously this year by finishing 6th in the Giro. his technique centered mostly on dominating breakaways. Down by 20 minutes, he will definitely not be a cause of concern for the GC and will do his thing if he is fit.

His presence in the break on Stage 4 suggest that he is not taking his form on the last week of the Tour de France to aim for top 10 GC again. Instead he is looking for stage win, a feat totally in his abilities unless Team Astana and Nibali have other plans.

The 8 times Luxembourg champions is back to if not even better to his old self after undergoing surgery following a vascular condition that was affecting his performance. Another Grand Tour stage win would be the best way for him to repay his French team prior to leaving for Bora- Hangrohe in 2023.