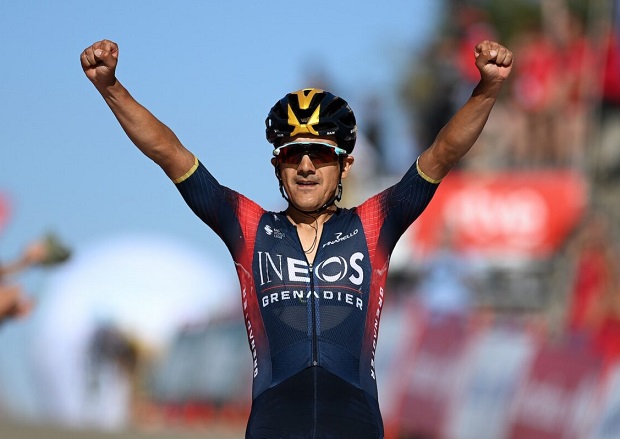 Richard Carapaz bagged another win in the Vuelta a Espana on stage 14, a 160km ride from Montoro to Sierra de La Pandera on Saturday, while Primoz Roglic attacked Remco Evenepoel to reduce the gap in the hunt for the leader’s red jersey.

The Ecuadorian climber was the only rider from the breakaway who managed to stay ahead of Miguel Angel Lopez , who came second after finishing eight seconds behind Carapaz.

“We knew that today was a very important stage for us, that we could repeat what we did the other day,” Carapaz said. “The truth is that it took a long time to get away, but in the end I was there at the right time.

“I was able to attack, I went alone and then my breakaway companions joined me. They came with me and then there was a pretty good collaboration.

“At the end, I knew the climb very well. So, I tried to set my own pace, without losing hope, because I knew it was very hard. It has been a great stage, quite important for my record and for me. Above all, it gives a lot of morale.”

Roglic came third with a gap of 48 seconds to Evenepoel on the line.

The Belgian retains the red jersey, 1:49 ahead of Roglic and 2:43 clear of Enric Mas ahead of another big mountain stage in Andalusia on Sunday.

🇪🇨 From Carchi to the top of the world!

🏆 2nd win for the INEOS Grenadiers man at #LaVuelta22 after a hectic battle on la Sierra de la Pandera.