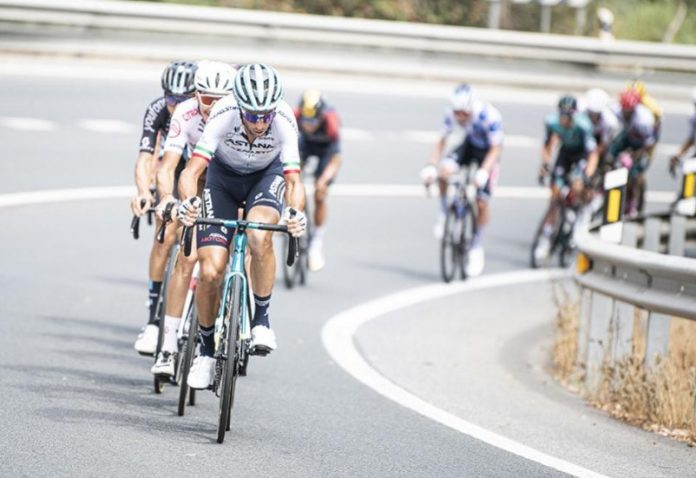 Mads Pedersen finally secured his first Vuelta win and there was not even a battle. La Vuelta a Espana 2022 stage 14 will be a completely different affair with boring flat roads leading up to a final mountain top finish.

Yet another day that starts with no particular difficulty. This will be the perfect platform for an amalgam of  riders to sneak in and take their chances. Rouleurs, expert breakaways, pure climbers and even some riders in the top 10 might have a go.

No team has enough riders left to take on the chase and aim for a stage win. Remco Evenepoel and other podium potentials will prefer to give some rest to their soldiers, particularly with a much harder day coming up.

Thibaut Pinot is the first name coming up. He will have the full support of his team to get into the break away and make it to the final climbs where it will be all up to him. Jay Vine and Mark Padun have both shown exceptional form in this Vuelta and are the two favourites for the win.

Team Astana Premier tech, Team UAE Emirates and Team Bahrain Victorious all have multiple options. David De La Cruz, Alexey Lutsenko and Vincenzo Nibali carry the the Kazakh team hope. Marc Soler and Jan Polanc will definitely be part of the break away while Gino Mader, Edouardo Zambanini and Mikel Landa will be showing themselves.

Trek Segafredo’s duo of Juan Pedro Lopez and Kenny Elissonde would have preferred a more hilly start while Team Lotto Soudal are running out of stages to get UCI points.

Finally there are a couple of riders who could try to propel themselves back into contention in a Wilco Keldermann way. Tao Georghegan Hart, Thymen Arensman, Louis Meintjes and even Alejandro Valverde could seize this opportunity.

The final climb after the day starts immediately after reaching the summit of the previous second category climb. Tallying nearly 20 km of climbing, the race physiology could change dramatically. Breakaways could be picked up one by one and the big boys have a go on their own.

Remco Evenepoel has shown his superiority day after day and the closest rider to him in terms of climbing, Enric Mas has proved once again that attack and him are never going to go together. All eyes will be on Primoz Roglic to try to destabilize the Red Jersey.

New Covid boy, Juan Ayuso could also try something to show that his social distancing game is on point. Miguel Angel Lopez will not back off if he sees a chance of going for a stage win.

Two stage wins, current king of the mountain, it is impossible to ignore the man.

If the stage win is possible when the main group reaches the foot of the penultimate climb, he will go for it and it will nearly impossible for any to match his acceleration or even try to follow him.

Slowly, gradual but sure suffocation. This is his style.

A favourite for all mountain stages. The form is here and about, he just need to be in the right group with the right time margin.

He has been knocking on the door of a Vuelta stage victory. The last 20 km suits him perfectly.