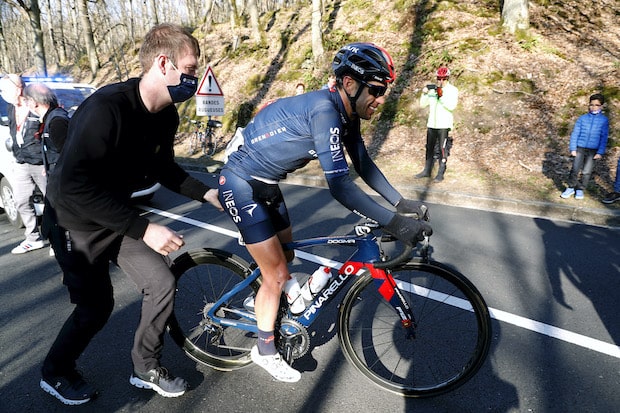 Richie Porte has been forced to abandon Paris-Nice on his debut for Ineos Grenadiers after suffering a crash in the opening stage.

The Australian, a winner in 2013 and 2015, hit the deck hard and although he climbed back onto his bike after receiving medical attention, he was forced to abandon a short time later.

His teammate Ben Swift said that the accident had happened when George Bennett had hit a discarded water bottle and had then veered left and took Porte’s wheel.

“It was really, really chaotic from early out. It was next to impossible to move up. Every time you’d pull up a little bit, there’d be like a mini crash, you’d lose position,” Ben Swift said about the crash.

“So we were just waiting for the climb to move up. And then as we started to go, someone drops a bottle, George Bennett hit it, turned left into Richie, and then it jut took Richie’s front wheel out. I was right beside it. I didn’t know if he’d get back up or not. We were just waiting, waiting for iinformation, and they said he was out. It was pretty chaotic.”