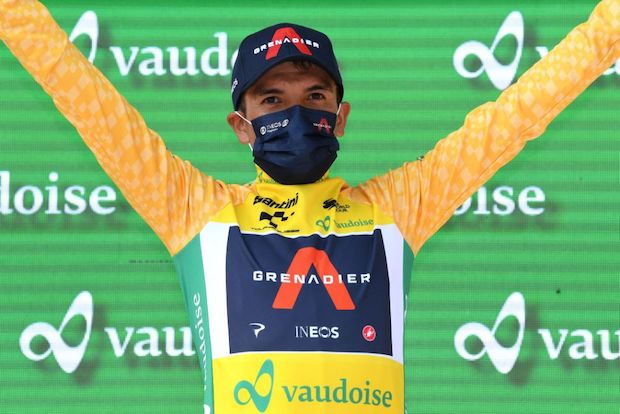 Carapaz, who won the Giro d’Italia in 2019, finished fifth on the stage that featured a steep climb 15km from the finish line. The result was enough for the Ecuadorian maintain his 17-second lead over Rigoberto Uran, his closest rival in the race for the yellow jersey.

The Ineos team had ridden hard as a unit to keep the race together during a fractured opening to the stage, and when the big attacks came on the cobbled Gotthardpass, Carapaz looked comfortable as he shut down each move.

Eddie Dunbar put in a towering performance in support of his teammate in the closing stages, setting a big tempo to pull back attackers, before re-joining to help on the descent and the final run-in.

Dunbar, who ended up fourth place on the stage and 12th overall, said: “The team rode really super today. Even at the start we controlled it very well. We got to the climb and we rode our tempo – in the end it was a very strong tempo.

“We expected the favourites to attack and they did. Thankfully we were able to respond and bring it home. I think Richie is a worthy winner of this race. He showed all week he’s the strongest rider here and he proved it again today. It’s a great day for the team again.”

The triumph follows Ineos victories by Egan Bernal in the Giro d’Italia at the end of May and by Richie Porte in the Criterium de Dauphine earlier in June.