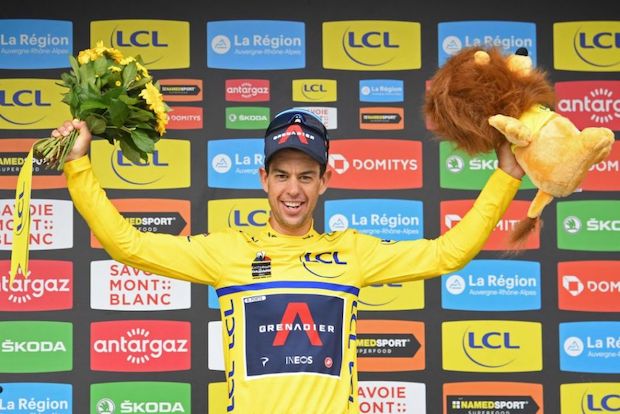 You can rewatch STAGE 8 of 2021 Criterium du Dauphine HERE

Porte went into the eighth and final stage in the overall lead and kept his head in the French Alps. He eventually finished 17 seconds ahead of Alexey Lutsenko in the overall standings. Geraint Thomas, winner of the 2018 Tour de France, rounded out the podium, 29sec off the pace.

Thomas fell in the descent from Joux-Plane, less than 10km from the finish line in the ski resort of Les Gets, but managed to reel himself back into the group containing the race favourites.

For the 36-year-old it was a sweet victory. He saw a potential victory in the Dauphine slip away on the final day back in 2017.

“This race, having been second here twice and once losing second in the last kilometre, to finally win it I’m just over the moon,” said Porte after the stage. “All the sacrifices, time away from my wife and two kids, is worth it. This team Ineos Grenadiers were just absolutely brilliant today.

“I know the descent of the Joux Plane well and we’ve done it many, many times, so decided to do it at my own pace. When I saw Geraint crash it wasn’t ideal for the last six kilometres. He has some pretty bad road rash, but he’ll be tip top for the Tour.”