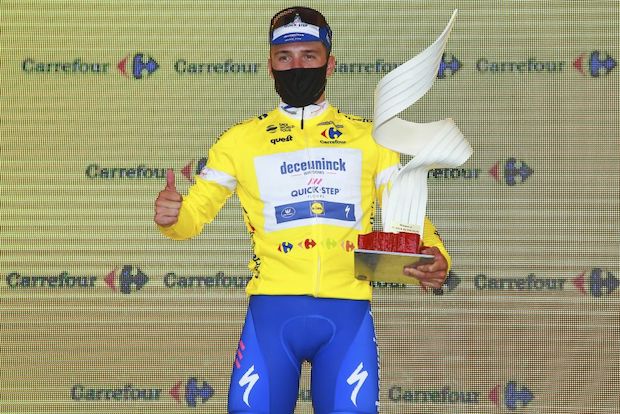 Remco Evenepoel won the Tour of Poland on Sunday as team-mate Davide Ballerini clinched the fifth and final stage in Krakow.

“For the team the hardest part of this race was the situation with Fabio,” Evenepoel said after his ninth victory of the season.

“We’ve been through a lot of emotions this week and if you see how we finish it off – two stage wins in a row and we take the GC home – I think that we can only say that we have been dominating this race,” he added.

Evenepoel was 1 minutes 52 seconds ahead of Jakob Fuglsang in second with Simon Yates in third after five days of racing in the 77th edition of the event.

Team Ineos’ Richard Carapaz pulled out after a crash on Saturday despite leading the overall standings before Evenepoel grabbed the yellow jersey with a 51km solo win on stage four.

Ballerini powered to victory in a bunched sprint by pipping Bora Hansgrohe’s Pascal Ackermann in second and Team Sunweb’s Alberto Dainese after 188 kilometres which finished with three laps in the southern city.