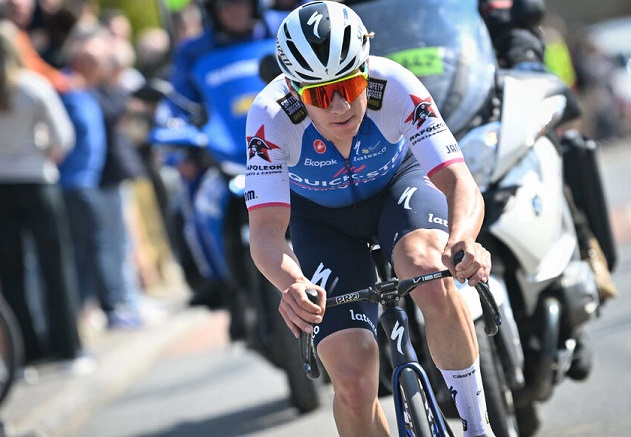 Remco Evenepoel won Liege-Bastogne-Liege on Sunday in his first appearance in the monument classic.

The 22-year-old dropped his rivals 30km from the finish of the epic 257km run through the narrow, Ardennes forest lanes to seal a career landmark solo triumph.

Quinten Hermans was second, while Wout Van Aert was third for an all-Belgian podium as 12 riders followed Evenepoel over the line 48sec adrift on a fast-paced edition of La Doyenne.

“It’s crazy,” said Evenepoel. “My first ever Liege and I win it. I wanted to explode the race on the Redoute and then I managed to cling on”.

Riding the final kilometre through Liege, Evenepoel looked behind to see the extent of his advantage before savouring the moment.

“I thank everyone who believed I would get back to my best level. I have done that and today I’m among the best in the world.”

The victory makes up for an underwhelming classics campaign from the usually dominant Quick-Step team, whose leader Patrick Lefevere insisted on reserving judgement until Sunday.

Evenepoel’s teammate, Julian Alaphilippe fell 60km from home after Tom Pidcock tumbled as the peloton was racing hard, taking down a mass of riders. The Frenchman flew off the road and downhill where a tree broke his fall and where his mangled bike was abandoned as he was taken away by ambulance.

“His condition his stable, but will need to be hospitalised for observation,” said Quick-Step in a statement.

“There was great confusion in the peloton, we also didn’t know if some of us were involved or not so we hesitated for a couple of minutes,” said Bahrain Victorious’ Matej Mohoric, hinting the crash had an impact on the outcome.

Alejandro Valverde was caught in the crash, as were Rigoberto Uran, Romain Bardet and Wilco Kelderman as the pack was reduced to 60 riders. Valverde rallied to finish seventh.