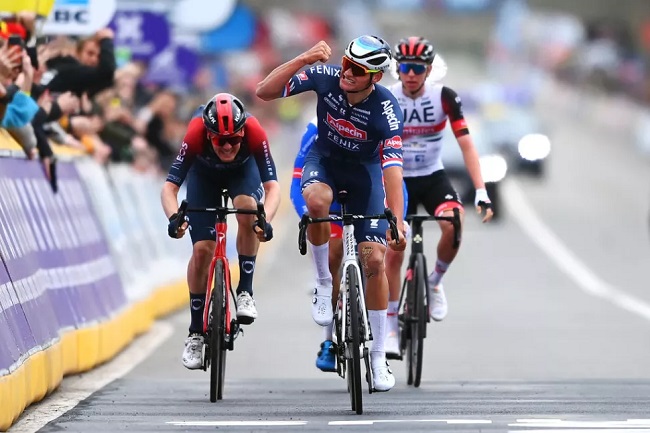 The Tour of Flanders will be one of the early major races in 2023 and next year’s contest will be the 107th edition in history. Some of the world’s best riders are expected to feature in the event which will end in Oudenaarde once again.

Here is a look at the leading contenders for the most prestigious cycling race in Flanders.

Dutch cyclist Mathieu van der Poel won the Tour of Flanders for the second time in his career in 2022. He has been installed as the +450 favorite to defend his crown next year. Those looking to back the market leader should consider the Betfair welcome offer bet 10 get 30 which can be used on the event. Placing a £10 bet on this race will see you pick up £30 to be used on any other cycling competition or event in their sportsbook.

It is easy to see why the bookmakers have made van der Poel their favorite. He was first successful in this event in 2020. He then regained his trophy back in April. Victory in 2023 will see him tie the record for the most wins.

Dream’s don’t work unless you do 👊🏻 WORLDCHAMPION 🌈 pic.twitter.com/fxaX18hdry

Van der Poel has had a lot of success throughout his career. He is a four-time winner at the World Championship in cyclo-cross, while he has stage wins at the Tour de France and Giro d’Italia.

The UCI ProTeam Alpecin-Deceuninck rider finished with a time of 6h 18’ 30” in 2022. He will be aiming to improve on that in his next appearance and that is likely to be enough to see him lift the trophy.

Not since 2017 has a home rider won the Tour of Flanders. Philippe Gilbert gave the home crowd something to cheer about five years ago when he prevailed for Quick-Step Floors. Belgian Wout Van Aert will be hoping to add his name to the roll of honor next year.

The 28-year-old won the points classification at the Tour de France in 2022, the biggest achievement of his career so far. He has now claimed nine individual stages at the Grand Tour event.

I guess I never stopped smiling the past few days, with saturday’s ride in mind. We had some beautiful and easy days in Tuscany with @JumboVismaRoad which made everything even better. But today we head forward to the next races #MilanoTorino & #MilanoSanremo ! pic.twitter.com/iACJBdhwHz

Van Aert is arguably in the best form of his career, so he goes into the 2023 renewal of the Tour of Flanders as the biggest threat to the defending champion.

Denmark’s Kasper Asgreen won the Tour of Flanders in 2021. He clocked an impressive winning time of 6h 02’ 12” that year, finishing ahead of van der Poel and Greg Van Avermaet respectively.

Since that win, he has been victorious in the 2021 Danish National Time Trial Championships. He was also third in the Strade Bianche earlier this year in Siena in the race which was won by Alexandr Kolobnev.

Asgreen rarely runs a bad race in the Tour of Flanders. He finished second in 2019 so he is very used to challenging for the major prizes in the event.

The 2023 Tour of Flanders will take place on April 2 and it is one of the highlights on the UCI World Tour calendar next year.